Can It All Be a Coincidence?

This article is astonishing. I am familiar with some, but not all of the “just happens” but I’ve never seen them lined up like this before. It’s beyond disturbing.

(Oct. 1, 2012) — As I noted in the introduction to my book, The Obama Timeline, a jury at a murder trial will often find the accumulated circumstantial evidence so overwhelming that a guilty verdict is obvious—even though there may be no witness to the crime. “The jurors in the Scott Peterson trial believed the collection of evidence more than they believed Scott Peterson. Among other things, the jury thought that being arrested with $15,000 in cash, recently-dyed hair, a newly-grown goatee, four cell phones, camping equipment, a map to a new girlfriend’s house, a gun, and his brother’s driver’s license certainly did not paint a picture of a grieving husband who had nothing to do with his pregnant wife’s disappearance and murder.”

In the four years I have been gathering information about—and evidence against—Barack Hussein Obama, I have encountered hundreds of coincidences that strike me as amazing. None of those coincidences, by themselves, may mean much. But taken as a whole it is almost impossible to believe they were all the result of chance. Consider the Obama-related coincidences:

Oct 30 Pray for Our Nation

The Prophet Samuel said to King Saul,
“Does the Lord delight in burnt offerings and sacrifices
as much as in obeying the Lord?
To obey is better than sacrifice,
and to heed is better than the fat of rams.
For rebellion is like the sin of divination,
and arrogance like the evil of idolatry.
Because you have rejected the word of the Lord,
he has rejected you as king.”
~ 1 Samuel 14: 22-23

Oh God of wisdom, justice, and might, we ask your guidance for those who govern us, and on those who would govern us:  the president and vice-president, the Congress, the Supreme Court, and on all those who seek to serve the common good by seeking public office, especially Governor Romney and Congressman Ryan.  Make them all worthy to serve you by serving our country.  Help them remember that the only just government is the government that serves its citizens rather than itself.
~ Excerpt from Archbishop Dolan’s prayer at the RNC convention

From Robert Laurie at caintv.com:

Michael Moore and MoveOn.org have teamed up to create the most base, unpleasant campaign ad ever.  Featuring a host of foul-mouthed elderly voters, the spot threatens violence against both Mitt Romney and the country as a whole.

“I want the Republican Party to know – if your voter suppression throughout this beautiful country enables Mitt Romney to oust Barack Obama? WE WILL BURN THIS MOTHERFUCKER DOWN.”

Yup, that’s an actual line from an honest to goodness political ad, offered by America’s premiere hack propagandist and everyone’s favorite radical leftist political action Committee.  MoveOn, of course, is funded by a host of the world’s most prominent socialist activists, most famously George Soros.

The ad continues it violent rhetoric, with a threat that, “If the Republicans steal this election, I’m going to track down Mitt Romney and give him the world’s biggest cock punch. What’s the matter sonny, you never heard that phrase? Cock Punch?”

You can read the rest of the article here if you have the stomach for it.

Here is the ad. Watch at your own risk.

Meanwhile, back in Chicago, some of Barack’s homies are feeling a little disillusioned.

And in Colorado, here are some folks who really did build their own business. Now it’s gone. Guess who destroyed it? 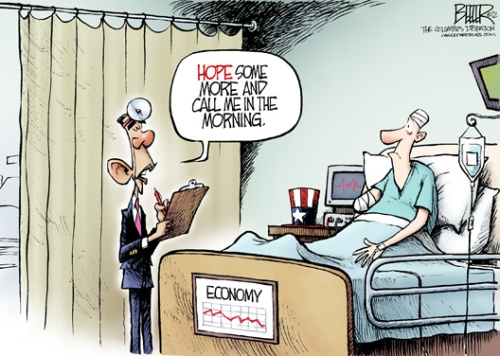 The countdown has begun!!