Aug 17, 2012: President Obama just wrapped up another hard-hitting interview where he discussed America’s top concerns, like whether he prefers green chiles or red, if “Call Me Maybe” is or is not his favorite song, and what superpower he wishes he had.

President Obama’s last formal White House news conference was on March 6. In June, he answered some serious questions from the press while he was at the G20.

But apart from some some “hard hitting” questions about his chile preferences from local radio and t.v. stations, he has avoided any settings where he could get serious questions from serious reporters.

Granted, he sat down with CBS This Morning in July. But the Media Research Council ranks CBS the most consistently and extreme left-biased news on television.

But he seems to be making a full-time career out of dodging the national reporters who are actually assigned to cover the White House.

It’s been over eight weeks since took a SINGLE QUESTION from the White House Press Corps.

Not that he hasn’t done interviews. There was that one he did with People Magazine. And that other one with Entertainment Tonight.

And let’s not forget the interview he did with a local sports talk radio show. I’m sure that one covered all KINDS of serious stuff us voters need to know before we choose who we want in the Oval Office come 2013.

If you liked this, you might also enjoy https://polination.wordpress.com/2012/08/15/world-class-tools/

(One can only hope.)

In the letter, Kerry says,

“No matter how self-evidently false the attacks are, or how disreputable the people telling them may be, there’s no attack that can’t take hold.”

Back in 2004, 250+ Swift Boat veterans went public to protest John Kerry’s contention that he was fit to be Commander-in-Chief. They published a book and ran ads on television and the internet.

Despite the fact that the Swifties damaged Kerry’s campaign enough that it possibly cost him the election, Kerry never responded to their accusations, never released his military records, never sued for slander.

In his Send-Barack-Money-to-Fight-SEALs letter, Kerry also says he “honors and appreciates” the service of his fellow veterans. Riiiiiight. I’m sure his honor and appreciation are what motivated him to tell a group of students,

“You know, education – if you make the most of it – you study hard, you do your homework and you make an effort to be smart, you can do well. If you don’t, you get stuck in Iraq.” [October 2006] 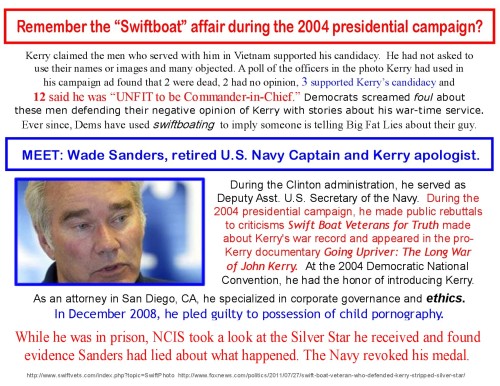