The view from my south windows

My husband took this picture of my deck garden just a few days ago. The weather for much of the summer has been brutally hot and humid — not very pleasant for human beings, but ideal for petunias, marigolds, evolvulus, and herbs.

Here are some pictures of my little friend Lily helping me plant flowers. Lily is four years old and has been coming to my house one day a week for most of her life. She loves to help with the gardening, as you can see. 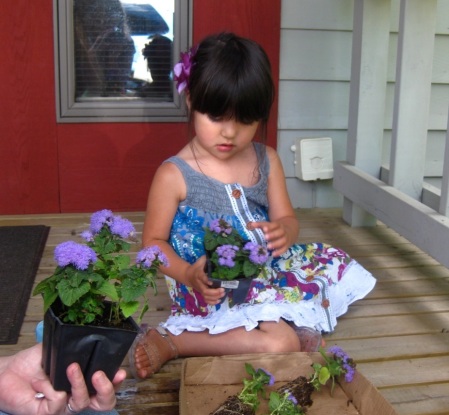 The Environmental Protection Agency web-site states that overexposure to UV radiation is linked to skin cancer (melanoma and nonmelanoma), premature aging of the skin and other skin problems, cataracts and other eye damage, and immune system suppression.

H/t to bob for giving me the heads up!

The mass murder in Aurora, Colorado, has brought forth the usual Leftist calls for more gun control legislation. Obama is no exception, weeping crocodile tears for

“the dozens gunned down on the streets of Chicago and Atlanta, and here in New Orleans … Milwaukee or Cleveland.”

Romney made a different, and to my mind more common sense, point.

THE THURSDAY AT THE MOVIES GRUDGE

Seriously,y’all,its not that I’m shirking my investigative duties,its just that I have so many youtubes cached,I need to clean out some of them.Be assured I spend hours loking for stuff and I am including some really good (I think,anyway) links.Most of the videos are short,so they won’t take up too much of your time.Please enjoy them.

The MORAL case for Free Enterprise

The Moral Case for Free Enterprise [7:57]

This excellent video would be a good choice for your liberal, Democrat-voting Christians, people who truly care about the poor, but have been suckered into believing that Obama’s socialism is more fair and better for the poor than Romney’s free enterprise.

Brooks wrote The Road to Freedom: How to Win the Fight for Free Enterprise (2012) and The Battle: How the Fight between Free Enterprise and Big Government Will Shape America’s Future (2010) which I have not read.

He also wrote one of my all-time favorite books, Who Really Cares: The Surprising Truth About Compassionate Conservatism (2007). This one cured me FOREVER of the Democrats’ lies about fairness and free enterprise.

Brooks used to be a typical liberal university professor. His own research forced him to change sides. In this video, he says, “We have to see that we’re not in an economic battle for the future of America. We’re in a moral battle.” ITA.

H/t to Bluebird of Bitterness and Grunt of Montecristo.