I could arrange the links in concise,orderly fashion-but that wouldn’t be my style

A GATHERING OF ALL THE PEOPLE RESPONSIBLE FOR KILLING BIN LADEN..ACCORDING TO THE NAIROBI NITWIT

More than a little upset

Got this in email. It needs nothing from me!

Here’s a response in a letter from PATTY MYERS in Montana … I think she is a little ticked off! She also tells it like it is!

1. As a career politician, you have been on the public dole for FIFTY YEARS.

3 My Social Security payments, and those of millions of other Americans, were safely tucked away in an interest bearing account for decades until you political pukes decided to raid the account and give OUR money to a bunch of zero ambition losers in return for votes, thus bankrupting the system and turning Social Security into a Ponzi scheme that would have made Bernie Madoff proud..

5. I, and millions of other Americans, have been paying into Medicare from Day One, and now you morons propose to change the rules of the game. Why? Because you idiots mismanaged other parts of the economy to such an extent that you need to steal money from Medicare to pay the bills.

6. I, and millions of other Americans, have been paying income taxes our entire lives, and now you propose to increase our taxes yet again. Why? Because you incompetent bastards spent our money so profligately that you just kept on spending even after you ran out of money. Now, you come to the American taxpayers and say you need more to pay off YOUR debt.

To add insult to injury, you label us “greedy” for calling “bullshit” on your incompetence. Well, Captain Bullshit, I have a few questions for YOU.

1. How much money have you earned from the American taxpayers during your pathetic 50-year political career?

2. At what age did you retire from your pathetic political career, and how much are you receiving in annual retirement benefits from the American taxpayers?

3. How much do you pay for YOUR government provided health insurance?

4. What cuts in YOUR retirement and healthcare benefits are you proposing in your disgusting deficit reduction proposal, or, as usual, have you exempted yourself and your political cronies?

It is you, Captain Bullshit, and your political co-conspirators called Congress who are the “greedy” ones. It is you and your fellow nutcases who have bankrupted America and stolen the American dream from millions of loyal, patriotic taxpayers. And for what? Votes. That’s right, sir. You and yours have bankrupted America for the sole purpose of advancing your pathetic political careers. You know it, we know it, and you know that we know it.

And you can take that to the bank, you miserable son of a bitch.

Look who is sitting up on her own! 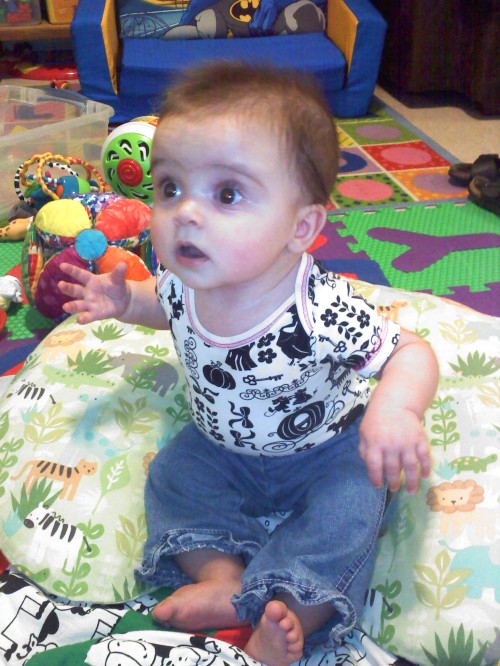 The pillow is just to cushion her head if she crashes. 🙂