Who are the One Percent?

To the extremists of Occupy Wall Street, the wealthiest 1 percent of Americans are all Wall Street vultures preying on vulnerable workers.

The reality is quite different.  For one thing, they live all over the country. For another, they are much more likely to be physicians or self-made business owners than hedge fund managers.

Some things do characterize top earners, but it isn’t race, conservative politics or even silver spoon families. (Only two in five inherited money. The rest made it on their own.)

One percenters work much longer hours than the rest of us. They are more likely to be self-employed and nearly twice as likely to be married. They also have more children (though not more cars) than middle- and upper-middle-class families.

A vast majority graduated from college and, in a whopping 27 percent of couples, both partners have advanced degrees.

They earn less than 20 percent of all pre-tax income nationally, pay more than 25 percent of all federal taxes and account for nearly 33% of all charitable giving.

So much for the idle, selfish rich myth.

The overall average income for all of the top 1 percenters nationally was $1.5 million a year. At the top end are billionaires like Warren Buffett.

At the bottom end are households that earned as little as $380,000 a year … which is $20,000 less than we pay President Obama, whose job also includes enormous perks like luxury housing and five star cuisine, round the clock security, limousine, helicopter and private jet service, and dozens of office and household staffers.

Obama also has a fortune tucked away from previous years when his book sales brought him millions in extra income. Since his book income dropped, he is no longer in the stratosphere of the top ten percent of the top 1 percent. This group of the super rich has only 120,000 tax filers in it. Their average income in 2011 was $6.8 million.

But in 2009, Obama took in $5.5 million from book sales, making him easily a member of the evil elite … or so the Occupiers would say, if they had any sense.

Although many one percenters lean toward the Republican Party, they’re far from politically homogeneous.  Just take a quick look at prominent Democrat supporters like Warren Buffett and George Soros, mega-rich entertainers like Oprah Winfrey, Michael Moore and Tyler Perry, and the goodly number of wealthy politicians.

But even those who say they don’t mind paying more in taxes aren’t happy with being demonized for being hard-working and successful. Some say they fear the class warfare that Democrats and Occupiers are promoting puts their families’ safety in jeopardy. Some have been personally targeted by protesters, making their fears understandable.

One pair of the “evil, idle” one percenters interviewed by the New York Times didn’t even know about Occupy Wall Street. They are much too busy curing cancer 11 hours a day, then squeezing in some quality time with their two children to follow politics. When the slogan was explained, the wife shook her head and suggested some context was in order. She and her husband had spent fourteen years each studying and working long hours to achieve their current income level. And they are still paying off medical school loans.

Another man noted that he had built his business from scratch and is proud of it. He works hard, creates jobs and contributes to charitable causes. “I’m not hurting anyone. I’m helping a lot of people.”

One noted, “If you pay $50 million in taxes, is that fair or unfair? When a tax is specifically designated for a tenth of a percent of the economy, it’s hard not to feel targeted.”

But is this wise? Do we really want to allow the Left to demonize hard work and success?  If the pot at the end of the rainbow has nothing in it but scorn, slander and punitive taxes, who will bother to give up so much to invent a new gadget, get advanced professional training, or build the businesses that provide the products, services and jobs we all want?

Who are the 1 percent?  NY Post editorial – January 17, 2012
http://www.nypost.com/p/news/opinion/editorials/who_are_the_percent_b53YH1O3zjel3L6wRJmjbI

Even when they’re lying, DemocRATS manage to expose their true nature. Note that, in Vice President Biden’s version, the tough part about the decision was the risk Obama was taking with his political career, not the risk he was taking with the men he was sending into harm’s way. 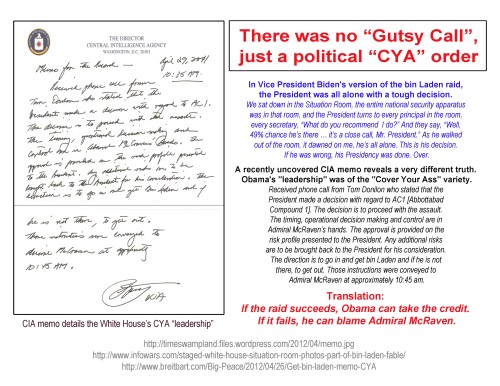 If you liked this, you might also enjoy @ https://polination.wordpress.com/2012/04/01/media-silent-about-vicious-leftist-assault/