Watch this. Then pass it on. Please.

Media Matters claims it is dedicated to comprehensively monitoring, analyzing, and correcting conservative misinformation in the media.

But they don’t stop at fact checking. They work at trying to silence conservative news and talk outlets altogether.

They recently organized professional activists to punish businesses that advertise on The Rush Limbaugh Show.

These people tied up phone lines and bombarded websites, Facebook pages and Twitter accounts to try and keep real customers from getting through.

Mark Stevens appeared on the Fox Business Channel on Varney & Co. to describe how he’s being targeted by Media Matters for America and related groups for advertising on Rush Limbaugh’s show.

He said that this is not a boycott.  It’s terrorism.  It’s a small number of people trying to make themselves sound like a large number of angry customers who are never going to patronize the business again. But they’re not. They’re Democrat operatives.

Stevens reported he received 40,000 e-mails about his decision to continue advertising his business on Rush’s show. Thirty-eight thousand of them were supportive.  Two thousand were critical.

RUSH:  “You ever notice, folks, when a conservative does not like a talk show, they change the channel.  They don’t watch.  That’s why these left-wing networks don’t have much audience.  But when a leftist doesn’t like a talk show, they scream, “Racism, elitism, bigotry, homophobia,” and then they start demanding censorship.  That’s exactly who they are and what they do.”

If you’re looking for bias, you don’t need to travel far into Media Matters background. They are supported by progressives connected to the Democratic Party, including Hillary Clinton, George Soros, MoveOn.org, the New Democrat Network, and the Center for American Progress. 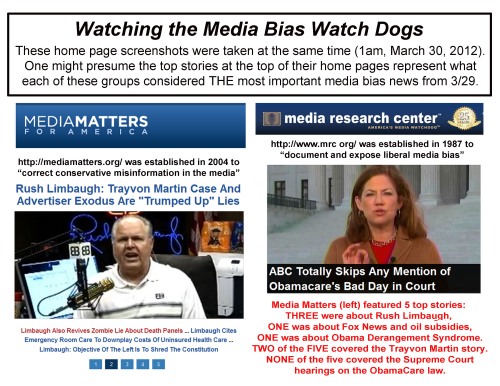 Comments Off on Watchdogging the watchdogs

The problems we face today

Comments Off on The problems we face today