The race-baiting Democrat Media Complex outrage over the Trayvon Martin killing is based on two premises, both of which are myths.

Myth One is that Neighborhood Watch Captain George Zimmerman was being a racist bastard for being suspicious of Martin just because he was a Black Male. FBI murder and U.S. Census stats from 2010 show that Black Males constituted a mere 7.5% of the total population, but committed 39% of the murders.

Myth Two is that White violence against Black victims is a huge problem. But FBI stats show that Blacks murdered Whites more than TWICE as often in 2010 as the other way around. 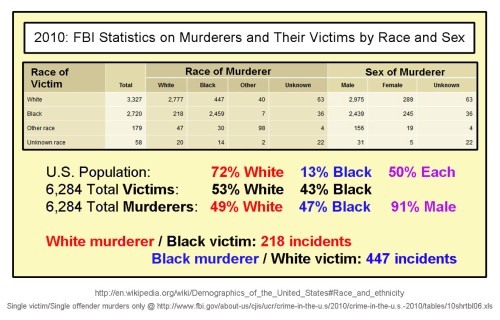 One response to “FBI Stats vs Democrat Racism Myth”