Believe in what exactly? 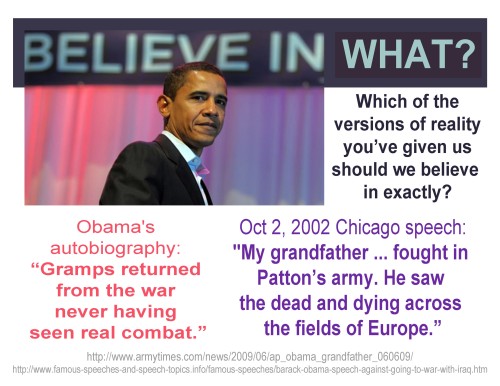 He had a uncle

May 2008: Senator Obama campaigning in NM

Transcript: “I had a uncle [sic] who was part of the first American troops to go into Auschwitz and liberate the concentration camps. The story in our family was that when he came home, he just went up into the attic and he didn’t leave the house for six months.”

Obama’s mother was an only child. He did not have any American uncles. He did have a great-uncle, 2LT Ralph Dunham, who was a personnel officer in the U.S. Army during World War II.

Ralph’s war was spent doing paperwork, keeping track of soldiers and making sure they got paid. He arrived at Omaha Easy Red beach four days after the Normandy invasion, by which time the area was secure.

He said he never saw direct combat, though his unit was “bombed a few times.” The only mention of his time in Europe says that he “pushed through France, Italy and Germany.” It’s a little hard to fathom how an American soldier who landed on Omaha Beach managed to spend any time in Italy. France and Germany, certainly. But not Italy.

One thing is certain. He did NOT help liberate the concentration camp at Auschwitz as Obama claimed in New Mexico in 2008. Auschwitz was liberated on January 27, 1945 by the 322nd Rifle Division of the Soviet Army.

The United States Holocaust Memorial Museum and the Center of Military History credits American troops with the liberation of Nazi concentration camps at Buchenwald, Dachau, Flossenbürg, Mauthausen, Neuengamme and Dora-Mittelbau.

There is a 3 minute video about the Soviet, American, British and Canadian liberation of the camps @
http://www.ushmm.org/wlc/en/media_nm.php?ModuleId=10005131&MediaId=7826

It’s possible Obama’s great-uncle witnessed and was traumatized by the liberation of some other concentration camp, though one might suppose that an event of this historic magnitude, that was allegedly burned into the Dunham family lore by Uncle Ralph’s alleged Post Traumatic Stress, would have included the name of the actual camp or been worthy of mention in the interview the man gave after his grand-nephew got famous.

It appears that teen marriages and abandonment were part of Obama’s family tree on both sides.

Barack Obama Sr. had several wives (two at a time on more than one occasion), plus a mistress, who collectively bore him 6 children. He left his first wife and family in Africa when he went to Hawaii to attend college. While there, he allegedly married Obama’s 18-year-old mother and fathered Barack Jr.

The validity of this relationship is questionable. Nobody remembers seeing them together. Nobody attended the wedding. And there is no record of the marriage. There is also no evidence they ever lived together. By all accounts, Barack Sr. was an abusive alcoholic who finally killed himself driving drunk at age 46.

After Baby Barack arrived, he and his mother lived with her parents, then moved to Seattle until after Barack Sr. had left Hawaii for Harvard, when they moved back to Hawaii. While at Harvard, Barack Sr. divorced Barack Jr.’s mother and hooked up with another American, who bore him 2 sons and followed him back to Africa.

Barack Jr.’s mother remarried and moved to Indonesia with her new Indonesian husband, who changed the boy’s name to Barry Soetoro and put him into a Muslim school. They had a daughter, Barack’s half sister Maya, when Barack was 9 years old. A year or so later, Barack Jr. was shipped back to Hawaii to live with his grandparents and his name was changed back to Barry Obama. He graduated from the private Punahou High School in 1979.

The Indonesian marriage also failed, but Barack’s mother mostly stayed in Indonesia working on her doctoral thesis. Maya’s father remarried and had two other children. Maya was home schooled by her mother and then attended Jakarta International School from 1981 to 1984, then moved to Hawaii to attend Punahou, from which she was graduated in 1988.

Barack Jr. was supported primarily by his maternal grandmother, Madelyn Dunham, who worked at a bank. Her husband, Stanley, doesn’t appear to have been steadily employed, though he reportedly kept control of the family car while his wife commuted to work on the public bus.

Stanley’s parents seem to have followed a similar pattern. In 1920, Stanley (aged 2) is recorded in the census with his brother Ralph (aged 3), their mother Ruth (aged 19) and father Ralph (aged 26). They were living with Ruth’s parents. Ralph was working as an auto mechanic. Ruth’s father was an oil man.

Other sources say that Ruth committed suicide when her boys were 8 and 9 and that young Stanley found her body. It appears they stayed on with the maternal grandparents, while their dad moved back home with his parents in another county.

On the 1930 census, the boys are enumerated with their maternal grandparents in Butler County, Kansas. Their maternal grandfather and provider (aged 56) is listed as an oil pumper. His wife (aged 53) appears to have been the primary homemaker. The 24 year old maiden aunt worked as a stenographer at the oil company, presumably helping to support the grandmother’s father, who was elderly and retired, plus the two boys. Ralph had a paper route.

In that same 1930 census, Obama’s great-grandfather, Ralph Sr. (aged 38), is shown living with his parents in Sedgwick County, Kansas. Ralph is working as a druggist in a retail drug store. His father is a medical doctor. There is also another boy, Russell Jackson (aged 13), who is listed as a grandson. He was therefore Ralph Sr.’s nephew and the first cousin of Obama’s grandfather and great uncle. In fact, he was the same age as his cousin Ralph.

In other words, when Barack’s grandfather and brother were young, they lived in a household of six that was supported by one adult male laborer, an adult female stenographer, and a teen-aged boy’s paper route, while their dad lived in another county in a household of four that not only was supported by two adult male professionals, but also included their father’s nephew who was their same age.

Sheesh. Is it any wonder Wikipedia notes that Stanley was a rebellious teenager who allegedly punched his high school principal? It also says he spent some time knocking around, riding the rails, before marrying Madelyn Lee Payne on her prom night, May 5, 1940.

In Barack Obama’s memoir, Dreams From My Father, he describes Madelyn’s parents as “stern Methodist parents who did not believe in drinking, playing cards or dancing.” She liked to go to Wichita, Kansas to see big band concerts, not likely to be something her folks approved of. That’s how she met Stanley Dunham.

Nineteen months after they were married, Stanley enlisted in the Army on January 18, 1942. His daughter, Obama’s mother, was born November 29, 1942.  During the war, Madelyn Dunham worked on a Boeing B-29 assembly line in Wichita. Stanley served 3½ years, then was discharged August 30, 1945. After the war, the family moved to Berkeley, California, back to El Dorado, Kansas, then to Seattle, Washington, then to a Seattle suburb, then to Hawaii. Stanley sold furniture. His wife was an officer at a bank.

Stanley died in Hawaii in 1992. His wife cared for Ann during her final illness until she died in 1995, also in Hawaii, when Barack was in Chicago, running for his first State Senate seat. Madelyn died November 2, 2008 at age 86, just before Obama was elected president.

To their credit, he and Michelle succeeded in breaking the Obama and Dunham pattern of teen marriages and abandonment of children to the care of grandparents.

THE GREAT OBIMI DOES HIS MAGIC ACT AGAIN