I started doing my research this morning and thought, “aw,crap–this is gonna take awhile”
Undaunted,I write on.

GALLUP:OBAMA APPROVAL AT 43%
He’s down close to the radical core;wait till gas gets close to $5.00

I am Andrew Breitbart

“Conservatives used to take it, but we’re not going to take it anymore.” Andrew Breitbart 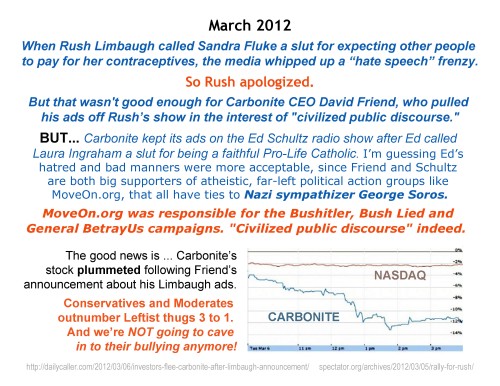 For more on the Rush ads and Carbonite, plus a list of Rush sponsors (and contact information) who pulled their ads in sympathy with or due to pressure from Leftist Thuggery, go to http://spectator.org/archives/2012/03/05/rally-for-rush/

H/t to Pete’s Grudge Report for links to Breitbart video and to
http://dailycaller.com/2012/03/06/investors-flee-carbonite-after-limbaugh-announcement/

“Discover the godly values of American history with the American Heritage Series.”

We’re watching this now and it is fantastic! I just put another set (for our sil’s birthday) in my cart at Amazon priced @ $34.50 (which also qualifies for free shipping). It’s the best deal I know of and an amazing price when you consider there are TEN DVDs in the set! Each one has 3 half hour episodes.

The episode Dearest and I watched today (#7) was on the same subject that the author of the article below discusses. I.e., that our legal theory and political and moral philosophy come from religion. I can’t urge you often enough to buy the set, watch it yourself and plant your youngsters in front of the tube and make them watch it.

These are not right-wingnut rants or preachy t.v. sermonizing. They’re American history based on original documents which are not just quoted, but shown in first editions. Really fascinating stuff.

The episodes are divided into approximately 9 minute segments with annoyingly repetitious commercials you will want to fast-forward past after you’ve seen them way too many times. If they’d left them off and gotten someone to run a comb through that woman’s hair, I’d have no complaints whatsoever.

Now … on to an article by the brother of our very own Bob. It is really worth your time … unless you’re a big Dawkins fan, in which case you’ll want to print this out so you can burn it. 🙂

Well, Richard Dawkins’ seventy-first birthday is almost upon us.  I thought it was about time I roast him a bit, as I have done with other famous atheists. Since there has been an avalanche of book-length critiques of Dawkins’ books, this column will focus on the video below.

As I have noted before, the problem with scientists is that they make poor philosophers. Dawkins is apparently a first-class biologist, but when he steps into the realm of philosophy his pronouncements are so full of freshman mistakes, vigorous head shaking is the natural response. And yet, in this video much of the audience enthusiastically applauds his rhetorical sleight of hand, like the ancient Athenians applauding a Sophist, showing what sheeple they are. OK, now watch the video, and see how many flaws you can find in Dawkins response to the question posed to him. I’ll wait. Watch it more than once if you need to.

Ah, you’re back. Did you notice that he never answered the question? Essentially the question was, “Would it not be an irrational leap of faith… for an atheist to decide between right and wrong?” It calls for a “yes” or “no” response, neither of which may Dawkins offer without betraying the weakness of his position. Obviously he can’t say, “Yes” without admitting that he is a hypocrite, effectively giving up the whole charade. But if he says “No,” then he must offer us a foundation for moral decision-making that is based solely on a materialist view of the universe, and that is a project that he is unable to perform.