PolitiFact’s choice for Biggest Lie of 2011 is also the Biggest Surprise!

In 2009, PolitiFact selected Sarah Palin’s comment about “death panels” as the biggest lie.

So who could have ever guessed they’d choose “Republicans voted to end Medicare” for their Number One Lie of the Year 2011?!

The Democratic attack about “ending Medicare” was a pervasive line in 2011 that preyed on seniors’ worries about whether they could afford health care.

Occasionally, Democrats and liberal groups were careful to characterize the Republican plan accurately, but far more often, they demonized and distorted it with lies.

• They ignored the fact that the Ryan plan would not affect people currently in Medicare OR the people 55 to 65 who would join the program in the next 10 years.

• They used harsh terms such as “end” and “kill” when the program would still exist, although in a privatized system.

• They used inflammatory and inaccurate pictures and videos of elderly people who clearly were too old to be affected by the Ryan plan. E.g., one video showed an old lady in a wheelchair being pushed off a cliff. Another featured an elderly man who had to take a job as a stripper to pay his medical bills.

In a blog post, the DCCC stood by its claim, saying the ad accurately stated Ryan’s plan would “abolish” Medicare. But even the Washington Post (hardly a fan of Republicans) agreed they were lying.

Sadly for the future of Medicare and for the future of substantive debate in this nation, the Democratic lies worked. Polls showed voters were skeptical of the Ryan plan and want Medicare to remain largely the way it is now. It’s got virtually no chance of passing in the Senate or getting signed by Obama.

The unavoidable fact is that the post-WWII baby boomer generation is retiring by the tens of thousands and there is simply no way the remaining taxpayers can afford to provide so much for so many.

Democrats routinely demonize Republicans and lie about their plans whenever Republicans try to be responsible adults and take mature steps to stave off disaster.

We saw how well that worked in 2008, when the problems with Fannie and Freddie that Republicans had warned of caused the housing bubble, collapse and subsequent recession EXACTLY AS REPUBLICANS SAID THEY WOULD!

What did Democrats do?  THEY BLAMED REPUBLICANS!

Social Security AND Medicare are headed toward total collapse. Anybody with half a brain can see that. Democrats have always and almost certainly always will continue to refuse to deal with the hard choices necessary to retool these programs so they can survive.

If Democrats stay in control and leave things as they are, the programs will collapse, but it will somehow be made to seem as if it is the fault of evil Republicans.

If Republicans take control of the government and do the hard things necessary to save the programs in SOME form, Democrats will demonize them and lie about everything, just as they did in 2011 with the Ryan Plan.

Debbie Wasserman Schultz, the Democrats Talking Mouth in Chief, was asked, “Is the president responsible for laying off the people at Solyndra?”

She emphatically (and repeatedly) said, “No, because Obama is not the CEO of Solyndra.”

Interviewer: “The president is the CEO of the country.”

DWS: “But he’s not the CEO of Solyndra.” 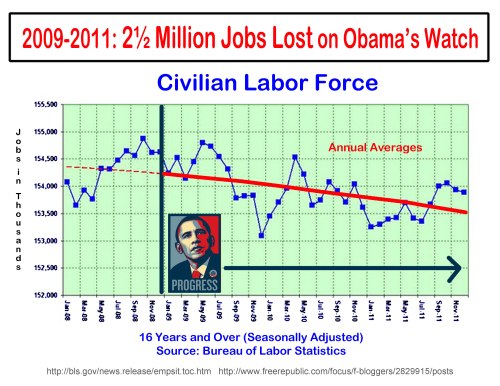 The Awww Pause That Refreshes

The news stinks. I need an “Awwwwwwwww” break. 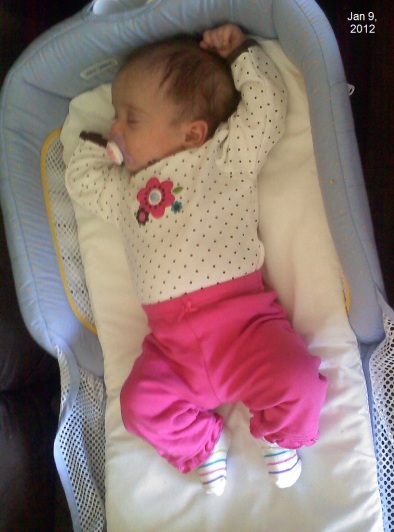 When her Mama was this age, I used to sit by the bassinet and just marvel at her.

Today would have been Richard Nixon’s 99th birthday.
What does that have to do with anything?Nothing.

I missed the Saturday debates.Miss Isabel was having her 8th birthday party at a local bowling center.(They don’t call them bowling alleys anymore.)I discovered after decades of a sedentary life I’ve become averse to big crowds and loud noises.Still,it was fun.

I tried to watch the MTLP debate with David “the hair” Gregory Sunday,but just couldn’t make it all the way.Why does the GOP insist on having debates moderated by these Leftards?
Economy in a shambles
The world about to break out in war
Fuel prices skyrocketing
Country falling into a dictatorship
“What is your view on gay marriage?”
“Will being a Mormon hurt your chances of being elected?”

I’ll never be elected to anything,but I guarantee I’d give a whole lot different answers than they did.

OBAMA TO SHARE SECRETS WITH RUSSIA
What a sly diplomat the Pharoah is.
http://www.commentarymagazine.com/

WHAT ARE YOU PREPARED TO DO?
How far will congressional Republicans retreat to avoid a confrontation with Obama?
How do you feel about Papua,New Guinea?
http://spectator.org/archives/2012/01/09/what-are-you-prepared-to-do

GOP:COULD OBAMA MAKE A RECESS APPOINTMENT OVERNIGHT OR ON A WEEKEND?
Who’s going to stop him?
http://thehill.com/blogs/floor-action/senate/202801-gop-senators-push-for-answers-on-new-recess-appointment-policy

DEMOCRATS EMBRACE VOTER FRAUD
It is as essential to them as the air they breathe (through their mouths).
http://townhall.com/columnists/luritadoan/2012/01/09/democrats_embrace_voter_fraud

OBAMA’S POLITICAL PLOYS COULD BACKFIRE
Pay no attention to the impostor behind the screen.
http://www.americanthinker.com/2012/01/obamas_political_ploys_could_backfire.html

OBAMA HOSTED TOP-SECRET WONDERLAND-THEMED PARTY AT THE WHITE HOUSE
Johnny Depp was dressed as the Mad Hatter–apparently Biden was babysitting the children.
http://www.breitbart.tv/book-white-house-hosted-wonderland-themed-extravagant-hollywood-halloween-bash-before-burton-film-release/

FEDS FIND FAILURE IN COOK CO. HOMELAND SECURITY PROJECTS
The most frustrating thing about my state is that the tax-raising,business-destroying,credit-rating failure named Pat Quinn-ochio won just 2 counties in the last gubernatorial race–and he won.
http://www.suntimes.com/9853704-417/feds-find-failures-in-cook-co-homeland-security-project.html

THE CRISCO KID RIDES(AND DODGES AND DUCKS)AGAIN
To compare this Dupnik to a bag of hammers would be an insult to the hammers. 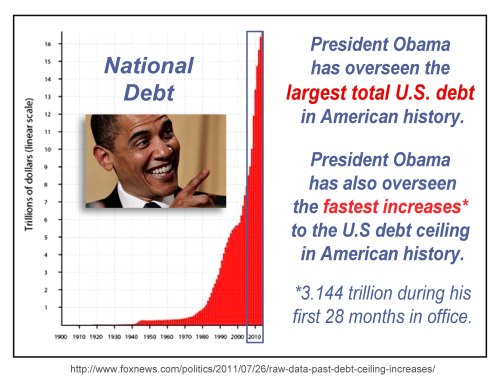 By way of comparison: During the 12 years George H.W. Bush and Bill Clinton were in office, Congress raised the U.S. debt limit by a total of $3.15 trillion.

Comments Off on Unprecedented spending