The most selfish president ever

The Bush clan spent 12 Christmas holidays at Camp David because that venue allowed the greatest number of staffers to be with their own families. Obama can’t even spend Christmas DAY at his posh tropical rental so others can spend THEIR day with their wives and kids.

Dearest and I went through his photos and chose the best of them for a photo album to give to his folks for Christmas. He got the car back (new alternator) and just left to see whoever is still hanging around the old homestead.

It’s just me and poos, so a good time for me to catch up on a few things … one of which is to make a new album at Chrissy’s Site Bites for my favorite Hyphenated photos.

Here are the first two that Dearest took when he was walking to get dog food, which we ran out of while the car was in the shop. He’s taken a lot of pics of this fountain, which is our village’s pride and joy. I think these two are among his best.

This is one of my unfinished Christmas presents … a quilted wall-hanging for the Corporals. Once I get Star’s face right, I’ll cut away the white backing and quilt her on to the sky background, then add a sleeve at the top so they can hang it off a rod. 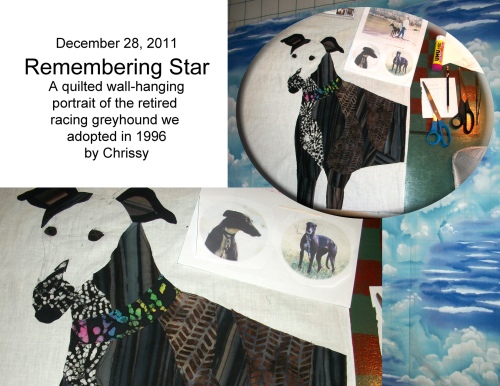 The snow often fell hard and heavy during the winters I lived in Colorado. It was coming down like crazy one afternoon when my boss closed the office and sent us home. I hurried to my car. I had to stop at the sitter’s house to pick up my two baby boys.

I made it the sitter’s house without too much trouble. “Be careful,” she said, as I strapped Nick, six months old, and Jon, 22 months old, into the backseat of the car.

But almost as soon as her house was out of sight, the wind picked up and the snow began to swirl. My wipers fought to keep the windshield clear. I was tempted to pull over, but didn’t dare. With the babies aboard, I couldn’t afford to get stuck.

I kept moving, going slower and slower, trying to peer through the blinding snow. Without any help from me, the car came to a stop. “Don’t worry,” I told the children. “Mommy’s just going out to take a look, to see where we are.”

I opened the door. The wind almost knocked me off my feet. I fought my way around to the front of the car. I’ve driven into a snowdrift, I realized.

I climbed back into the car. What to do? I was half a mile from home, on a little-traveled road, without a cell phone. No way could we sit and wait for help. The babies would freeze half to death. No way could I carry them home. I closed my eyes and silently prayed, Lord, please help us.

I heard tapping at my window and opened my eyes. A big man was standing outside, dressed in denim overalls and a green plaid shirt. “Do you need help?” he asked.

“Good thing I have a truck,” he said. He hoofed back to his old, green pickup, tied one end of a yellow tow rope to my car and the other end to his truck. Then he climbed behind the wheel and started his engine.

He pulled us several streets, even turned down my block and parked right in front of our house! So nice of him to go out of his way, I thought. While he untied the rope, I checked on Nick and Jon. Both were fast asleep. I turned back to thank the man… but he was gone. I looked down the street. Not a tire track in the virgin snow.

It was then that it struck me–I never even told the man where I lived.

How could he have known?

Comments Off on The Snow Man