We simply want a president

I’ve been really bothered by the spate of “Obama is going to win” columns I’ve seen sprinkled around the internet … on conservative sites! Sheesh. Who are these people who want to convince us our cause is hopeless? Huh? Democrat operatives? I mean, really.

What’s the point of nay-saying EVERY Republican candidate 12 MONTHS before the election?!

At this point in November of 2007, the top “shoe-in” contenders for 2008 were Hilary Clinton and Rudy Giuliani. And look what happened the first week in December. 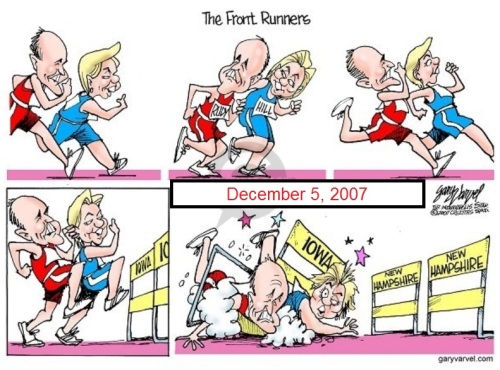 So what does THAT say?

And do we remember the uninspiring, fence-sitter these “conservatives can’t win” people on Left and Right gave us in 2008? There’s a reason for the “I voted for Palin” bumper stickers.

Anyway, the article below speaks powerfully to the nay sayers. We need to listen!

6 responses to “We simply want a president”