Shepard Fairey is the artist who created the iconic “HOPE” portrait for Obama’s campaign in February 2008.

At the time, the Obama campaign officially declined to have any direct affiliation with the image, but Fairey reported that he originally put the word “PROGRESS” on the image and only changed it to HOPE after the Obama campaign asked him to do so. Obama also sent him a personal letter of thanks.

In August 2009, Fairey created a darker, moody image of Obama for Rolling Stone that clearly shows he’d lost a lot of his sunny enthusiasm for Obama.

In December 2010, when asked how he felt about having done the “HOPE” portrait of Obama and how “that hope was working out for him now?”, Fairey replied:

“You know, I’m proud of it as a piece of grassroots activism, but I’ll just leave it at that.”

Yes, Fairey is proud of his HOPE poster and his career as a Left-wing artist-activist who has made a living plagiarizing other people’s work.

In typical Leftie-Hypocrite fashion, Fairey sneers at those who want their rights protected from his depredations, then turns around and demands his rights be protected for the same behavior.

Remember the video “Occupy Toronto” that I posted a few days ago?

It was long (16 minutes), so maybe all y’all didn’t listen to the end where there was an interesting discussion of the hypocrisy of the Occupiers with regard to police and private property. In short, the handful of Occupiers who were actually in the Toronto tent city at 4 a.m. got seriously riled when Levant tried to unzip one of the empty tents. (Levant’s crew had a heat imaging camera, so knew which of the tents had people inside.)

The Occupiers said Levant was violating the personal property rights of the tents’ owners. Levant said he was merely opening an empty tent that had been left on public property, and besides, didn’t the Occupiers (who were, after all, squatting on public property without a permit) claim to not believe in private property?

This got the Occupiers angry and they proceeded to menace Levant and his crew and threaten to call the cops if they didn’t leave. These were the same people who had called cops “pigs”, thrown things at them and demanded they leave the tent city alone. Then one of them got all up in Levant’s face and snatched his prescription eyeglasses right off his face and ran away with them.

So let me think … empty tent, no touchy … prescription glasses occupying face of owner, fair game?? Remind you any of Shepard Fairey? Me, too.

Color me unsurprised that Fairey is so supportive of the “grassroots” Occupy movement (which Levant says is being funded by unions) that he has produced a POSTER (for which I’m guessing he’ll expect the courts to protect his exclusive right to all profit from sales). 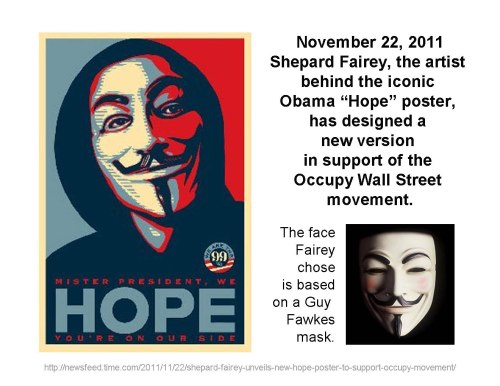 This time, Fairey’s chosen a Guy Fawkes mask for the face, so I’m guessing he won’t be experiencing a repeat of the AP lawsuit. Apart from that, I find this new image interesting for a couple of reasons.

One, I think it demonstrates a real ambivalence about Obama. “We are the 99%” (which they’re not, duh) is inside an Obama campaign button, but the message says “Mr. President we HOPE you’re on our side.” Hmm.

Poor broken-winged Far-Left birdies who thought Obama was the Messiah who would usher in the perfect Left-wing society where they got to have whatever they wanted whenever they wanted it.  One might go so far as to wonder aloud at how foolish they are to continue clinging bitterly to their rainbowy, unicorn-strewn Ø dream.

I was also intrigued by Fairey’s use of Guy Fawkes for the face of “Occupy.” It got me curious who Guy Fawkes really was. Here’s what I found:

Guy Fawkes (1570 – 1606) was a Catholic convert in Protestant England who learned warfare fighting on the side of Catholic Spain against Protestant Dutch reformers and then tried to use that knowledge to assassinate the English Protestant monarch, King James I, and put a Catholic on the throne.

He was captured by the King’s men and tortured until he confessed and named his co-conspirators. The man who supervised the torture reported, Fawkes “told us that since he undertook this action he did every day pray to God he might perform that which might be for the advancement of the Catholic Faith and saving his own soul.”

On January 31, 1606, Fawkes and three of his co-conspirators were publicly hanged, drawn and quartered. And, as was the custom of the times, their body parts were distributed to “the four corners of the kingdom”, to be displayed as a warning to other would-be traitors.

Since the day of Fawkes’ arrest and the “the joyful day” of the King’s “deliverance” from assassination – November 5th – Brits have celebrated with fireworks and bonfires. Although there were a number of co-conspirators, Guy Fawkes is the one everyone remembers and November 5 is known as Guy Fawkes Day. Celebrations traditionally include the ceremonial bonfire burning of a Guy Fawkes effigy during the fireworks display, though sometimes individual groups will substitute someone else they despise, such as the Pope or Margaret Thatcher.

Do I need to elaborate on all the ways it is just WEIRD that THIS is the guy Fairey chose for the “Occupy” face? I didn’t think so.

It kinda reminds me of the way these same ignorant morons revere Che Guevera. They don’t know any more about who Guy Fawkes really was than they do about who Che Guevera really was.

157 AIR FORCE MAJORS TERMINATED WITHOUT RETIREMENT BENEFITS
Not only do the liberal pricks lack the guts to defend our country,they seem to delight in pissing on those who do.
http://www.americanthinker.com/blog/2011/11/157_air_force_majors_terminated_without_retirement_benefits.html

OBAMA TURNS TO BIDEN FOR HELP IN THREE KEY STATES
You know you’re in trouble when you depend on a pompous gasbag who opens his mouth to change feet and steps on his own weiner as a matter of rote.
http://hosted.ap.org/dynamic/stories/U/US_BIDEN_2012?SITE=CAANR&SECTION=HOME&TEMPLATE=DEFAULT

HOLDER’S DEPARTMENT OF RETRIBUTION
Sadly,he’ll pay no price for any of it.
http://www.americanthinker.com/blog/2011/11/holders_dept_of_retribution.html

MR. TINGLES:THE NATIONAL MEDIA LEANS A LITTLE TO THE LEFT
If it leaned any farther it would fall as flat as your ratings,bonehead.
http://www.theblaze.com/stories/chris-matthews-the-national-media-leans-a-little-to-the-left/

1. The fattest knight at King Arthur’s round table was Sir Cumference. He acquired his size from too much pi.

2. I thought I saw an eye doctor on an Alaskan island, but it turned out to be an optical Aleutian.

3. She was only a whiskey maker, but he loved her still.

4. A rubber band pistol was confiscated from algebra class because it was a weapon of math disruption.

5. No matter how much you push the envelope, it’ll still be stationery.

6. A dog gave birth to puppies near the road and was cited for littering.

7. A grenade thrown into a kitchen in France would result in Linoleum Blownapart.

9. A hole has been found in the nudist camp wall. The police are looking into it.

11. Atheism is a non-prophet organization.

12. Two hats were hanging on a hat rack in the hallway. One hat said to the other, “You stay here; I’ll go on a head.”

13. I wondered why the baseball kept getting bigger. Then it hit me.

15. The midget fortune-teller who escaped from prison was a small medium at large.

16. The soldier who survived mustard gas and pepper spray is now a seasoned veteran.

18. In a democracy it’s your vote that counts. In feudalism it’s your count that votes.

19. When cannibals ate a missionary, they got a taste of religion.

21. A vulture boards an airplane carrying two dead raccoons. The stewardess looks at him and says, “I’m sorry, sir, only one carrion allowed per passenger.”

22. Two fish swim into a concrete wall. One turns to the other and says, “Dam!”

23. Two Eskimos sitting in a kayak were chilly so they lit a fire in the craft. Unsurprisingly it sank, proving once again that you can’t have your kayak and heat it too.

25. There was the person who sent ten puns to friends in the hope at least one of the puns would make one laugh. No pun in ten did.
h/t:IOTW

THE COMING EVICTION OF OCCUPY LA AN EXERCISE IN GROVELING
You can’t appease your enemy
http://www.americanthinker.com/blog/2011/11/the_coming_eviction_of_occupy_la_an_exercise_in_groveling.html

GOP FIELD RUNNING AGAINST THE MEDIA
The left doesn’t stand a chance in a fair fight–never has,never will
http://thehill.com/homenews/campaign/195467-republicans-running-against-the-media

OBAMA PLAYS GOLF FOR THE 30TH TIME THIS YEAR
http://www.whitehousedossier.com/2011/11/25/obama-plays-golf-30th-time-year/

OBAMA TO TAKE IN BASKETBALL GAMES TODAY
Glad to see he can take a little time away from focusing like a laser on jobs for the American people
http://www.whitehousedossier.com/2011/11/26/basketball-day-obama/

ARE PROGRESSIVES FOR THE LITTLE GUY?
http://townhall.com/columnists/johncgoodman/2011/11/26/are_progressives_for_the_little_guy

We simply want a president

I’ve been really bothered by the spate of “Obama is going to win” columns I’ve seen sprinkled around the internet … on conservative sites! Sheesh. Who are these people who want to convince us our cause is hopeless? Huh? Democrat operatives? I mean, really.

What’s the point of nay-saying EVERY Republican candidate 12 MONTHS before the election?!

At this point in November of 2007, the top “shoe-in” contenders for 2008 were Hilary Clinton and Rudy Giuliani. And look what happened the first week in December.

So what does THAT say?

And do we remember the uninspiring, fence-sitter these “conservatives can’t win” people on Left and Right gave us in 2008? There’s a reason for the “I voted for Palin” bumper stickers.

Anyway, the article below speaks powerfully to the nay sayers. We need to listen!