PREPARE YOURSELF FOR OBAMA’S SECOND TERM

RALLY IS REALLY A TANTRUM BY DECRY BABIES

At this point,all decorum and self-control go out the window and I make somebody bleed.

GIULIANI: ‘I WOULD HAVE STOPPED WALL STREET PROTESTERS ON DAY ONE.’

RON PAUL:GOP WILL BE PUNISHED IF IT CAPITULATES ON TAX INCREASES

GINGRICH TO MEDIA:LET ME EXPLAIN THE DIFFERENCE BETWEEN OWS AND THE TEA PARTY

And life goes on

HEDGE BROKER SHUTS DOWN FIRM WITH CHILLING LETTER ABOUT THE MARKET

THE PRISM OF ELECTORAL REALITY

Remember her?She left her banker husband and 4 kids in Florida to be a Wallbagger.Yesterday she was awarded a matching pair of steel bracelets courtesy of the NYPD

If Chrissy or Bob can delete one of the images,please do so.Files only upload from visual mode,videos from HTML mode.This post is a piece of garbage compared to magnificent posts Chrissy does.I don’t think I can do this anymore.

I’ve been disabled for more than 20 years and been on Medicare the whole time.

(I can’t tell you the number of dumb medical receptionists who were just SOOOOOO sure I meant “Medicaid” because I wasn’t “old enough for Medicare.” No, I am disabled. Medicare is also for the disabled. See, here? Look at the card. MedicaRE. Duh.)

I can’t claim to understand any jot or tittle of how it works. However, I can report what my 2010 statement says:

MINUS Medicare Part B premiums deducted from benefits: $1,156.80

The total benefits number has been the same 2009, 2010, and 2011. In previous years, I usually got ten or fifteen bucks extra each January. But according to some screwball, Twilight Zone system of accounting, the cost of living has not increased since The Zero took office; ergo, we all got Zero Cost of Living Adjustments.

It’s beyond me how they justified a zero COLA (Cost of Living Adjustment) two years in a row when prices have been sky-rocketing. Just ONE of the items I need on a regular basis has gone from $4 to $7 a bottle. Cripes, have the idjits in the Obambi Government SEEN the cost of GAS? Or GROCERIES?

It’s also beyond me why my Medicare premium went up when the alleged cost of living did not. I’m actually getting LESS cash this year than last year and stuff I gave up my little luxuries to afford in 2009 are not totally out of reach.

If Corporal K were not paying all the dogs’ expenses, we’d have had to give them away. To my mind, that right there is enough reason to NOT vote for the people who brought me this situation.

They engineered the economic collapse, forced through the legislation that has driven up energy and food costs, and have overseen every step of the 2009-to-present economic stagnation. And that’s not just mud slinging. I can prove it.

I guess I’m really stupid, because it’s ALSO beyond me why any retired or disabled person holding enough marbles to find a voting booth would vote for any Democrat in 2012, but I know they will.

Thank you all for your prayers. Baby Bunn’s cyst got even bigger in the night. I’ll spare you the photos of the angry red with pus oozing out. Yuck.

She went into surgery around 6pm. The surgeon found the cyst was bigger and went further back into her throat than he had thought from the ultrasound, so they’re watching her very closely tonight and tomorrow. They did get it all out intact and so far, she’s got no swelling. Her internal stitches will dissolve; the external closure is glue, so she can have baths as soon as she’s in the clear. 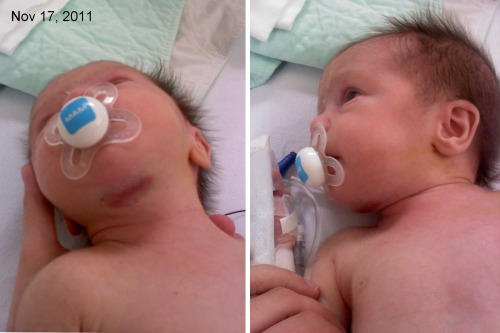 She has been getting nourishment by IV only since midnight Thursday and impressed the hospital staff by being content with just her pacifier until her surgery.  I’m not sure when she’ll be allowed to eat; there are too many complications if she spits up so Mama is pumping and freezing her milk until the docs give them the go-ahead for nursing or a bottle.

This hospital is a long way from their home, so Daddy and Brother Buzz came up Thursday morning and stayed until after our Bunny Girl got out of the OR, then went back home again. Mama was so proud of how well our Buzzer did and I was really delighted to hear he got to be in Bunny’s room as much as he wanted. Wow … have they come a looong way in the past half century!

I was hospitalized three times before I was two years old. Each time, my mother dropped me off, staying only until I was safely out of surgery, then she left and came back 2 weeks later to bring me home. Trust me. Those six weeks left me with a lot more than just surgical scars.

Later, when my sister and brother each had to have surgery, my mom could stay with them for the day, but not at night. I wasn’t allowed in the building and could only wave from a courtyard 3 floors below.

When Mama Buzz was the exact same age as our little Buzz (the week of her second birthday), her 6-week-old baby sister had to be hospitalized for a few days. It was really hard on her. We could tell she was worried about her sister, but she was not yet verbal enough to understand our explanations.

I tried taking Baby Sister down to the doors into Peds and have Dearest hold Big Sister up so she could see through the little strip of glass where we were and that we were okay, but it clearly wasn’t enough.

Fortunately, one nurse was very understanding and let us sneak Big Sister on to the ward for a quick peek of our room. It was clear from her body language that it was the fact that our crib was still at home she was concerned about. Once she saw that baby sister had a real bed in the hospital, she was content.

I was allowed to stay 24-7, but I got charged by the day for the use of a really uncomfortable little roll-away cot for which I got one set of sheets the whole time we were there. Baby had a huge crib big enough for a dozen babies her size, so naturally, she insisted on sleeping with me. In a bed about 24″ wide on a mattress 2″ thick.

I also had to go to the hospital cafeteria to eat and to the Emergency Room waiting area to use the public toilet!I was exhausted, grubby and more than a little resentful that the medical staff didn’t seem to understand that my being there was as important for the baby’s recovery as their tests and medicines and that a little consideration for my well-being would go a long way.

Anyway, with my past, I am extra grateful that Mama Buzz has a nice chair that folds out into what she says is a comfortable bed, plus a bathroom AND they’re bringing food to her!

Mama Buzz sent photos from her excursions with Little Buzz on Thursday. She said they both got a LOT of exercise. He visited with his sister for a while, but once he was satisfied she was okay, he wanted to explore with Mama while Daddy stayed with Bunny.

This hospital is the same place Daddy and Lil Buzz were allowed to room in with Mama for labor, delivery and newborn adjustment time. LOOK at all this place has to offer families and children!  Here are the photos with our Buzz in them. There were others of rose gardens in bloom! 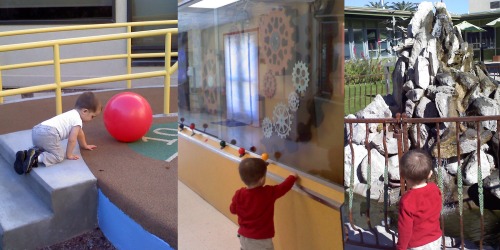 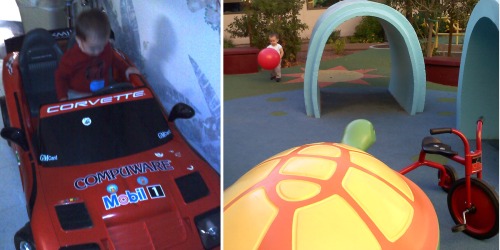 This poll appears to have been well conducted. Specifics about methodology are at the bottom of the graphic. (The numbers on my graph don’t add up to exactly 100% because of rounding. I’m more interested in a general comparison than mathematical accuracy.)

I found the three question I graphed the most interesting, because I think they demonstrate very clearly the lingering fear people in this country have for being accused of racism.

The first question is very personal, asking for an expression of approval or disapproval of our First Black President. The responses to this one have the lowest disapproval and the highest don’t knows of the three questions.

Look at what happened when they changed the wording from approval for the Black President to confidence in the White House! (And they say Americans are racists. Pshaw. What we are is deeply afraid of being perceived as racists.) 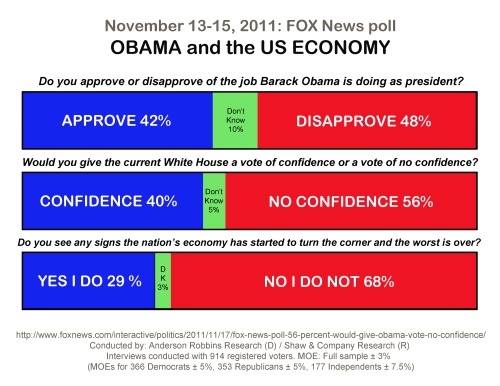 Personally, I think the third question gives the clearest picture of what registered voters are really feeling about Obama’s leadership right now. In 2008, while the war was the big issue, McCain was leading. Then the economy collapsed and all of a sudden Obama surged into the forefront.

I think it’s facile to think you can separate Obama’s leadership from the thing he was elected to do – i.e., fix the economy. Therefore, question three asked the same thing as questions one and two, but it did it without mentioned the Black President or his White House.

Here, where people felt really free to say what they believe, both approval for Obama and the number of don’t knows are at their lowest.