Moles in the White House?

I’ve often pondered if the person who forged Obama’s “long-form” birth certificate deliberately neglected to flatten the image and scrub it of the numerous, blatant artifacts of forgery. I mean … I’m far from an expert in digital imagery, but even I know how to flatten and scrub a file.

Then there was that delicious video of Obama trying to get into his own, locked office. Again … why was the door locked and, more intriguing, why was someone positioned in exactly the right spot to videotape it without getting caught?

I just came across two more items for the Obama Wall of White House Weirdness.

When the White House posted online an image of President Obama’s purported long-form birth certificate, it also linked to a PDF purporting to be a scan of the COLB (short form) the Obama campaign had obtained from Hawaii in 2008 and posted to the internet.

Despite their detailed explanation about how, way back in 2008, the Obama campaign had obtained the COLB from Hawaii and scanned and loaded it to the internet their very own selves, the image in the PDF file they link to was downloaded from Snopes on April 25, 2011.

If you go to the Snopes article about how “Totally Authentic and Convincing” Obama’s birth records are (snort) and click on the COLB graphic to embiggen it, then look at the image info, you see the exact same URL that is shown on the White House image. Fancy that!

Inquiring minds will no doubt immediately wonder why the colored jpg image from Snopes has been presented by the White House in a grainy, black and white PDF. This is, of course, apart from the puzzling question of why they swiped a Snopes copy of what they supposedly originated.

Well, I wasn’t THERE, being all eye-witnessy and all, but my guess is this: 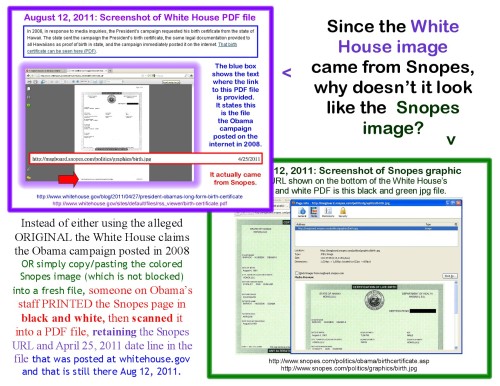 But wait. There’s more! Remember the FIRMLY WORDED White House dot gov statement about the COLB imagery provenance? How they REQUESTED it from Hawaii in 2008? Explain to me then why the Snopes COLB clearly shows a 2007 date stamp. Huh?

Based on the above, I can only conclude that one or both of the following must be true:

Who you gonna trust? 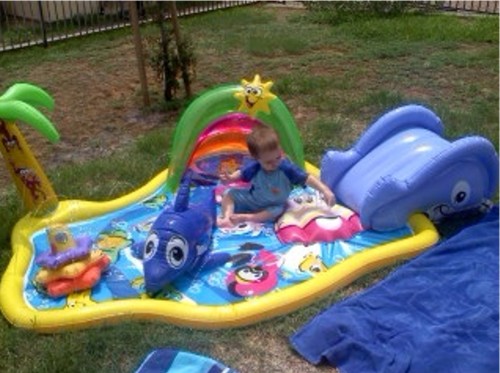 Lil Buzz’s latest accomplishment … he went down the TWISTY slide at the park ALL BY HIMSELF! In other news, I sent a box of dress up stuff out and Buzz apparently has decided the flapper beads are the Go To Fashion Accessory for 2011. They’re like diamonds … they go with everything from your manly “Born to Build” shirt to your quiet times with Veggie Tales. 🙂 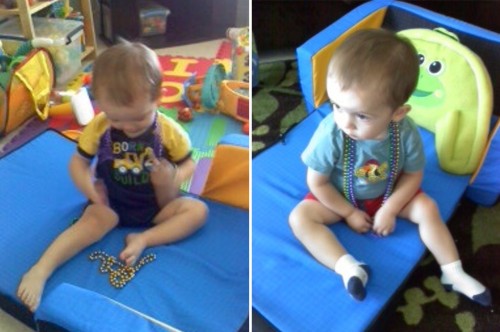 Well, THIS is FUN!

I was running searches and look what popped up!

I followed the link. It’s a blog specializing in polls and graphs on political issues. The owner swipes stuff from all over and doesn’t give linkies or credit to anyone. Sooo not like us, right?! But I have to admit to feeling rather tickled not only about hitting the top 3 rows in a Google search, but to being included with the likes of GALLUP and Rasmussen in the graphs the guy chooses for his blog. Yowza!

NO MORE MINNESOTA NICE;BACHMANN,PAWLENTY SQUARE OFF IN AMES DEBATE

GOP FIRES BACK AT DEMOCRATS’ TAKE ON IOWA DEBATE

THE WASTED VALOR OF THE NAVY SEALS

VIDEO: ‘HEAR IT IN MY VOICE–I’M FRUSTRATED’

Only to a fellow muslim,Jackass!

SEVERAL DEMOCRATS WASTE NO TIME IN ABUSING THEIR SUPER-COMMITTEE POSTS

THE LEFT’S SUMMER OF DISCONTENT

MAKING GOOD ON THE AMERICAN DREAM

OBAMA NUMBERS THAT ADD UP TO ONE TERM