I did not duplicate any news items; each of the cuts in the graphic below represents a different event.  When I googled “Obama blames”, I got multiple hits on each time he blamed somebody.  I only used one per. And I only got through the first 14 pages on the Google search results before I ran out of room. The hits themselves went on and on and on. 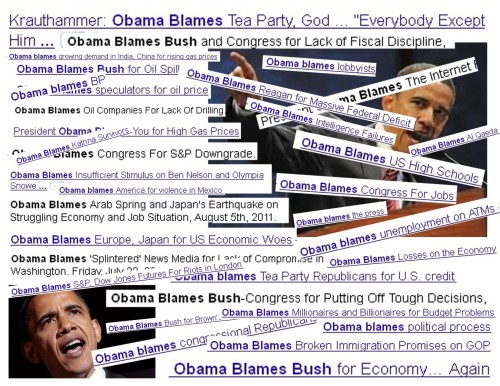 I remember when Obama giving a speech bumped his approvals UP. 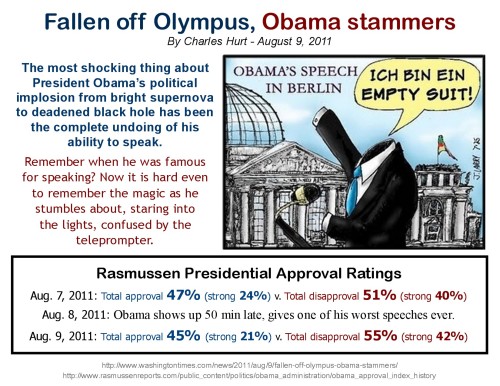 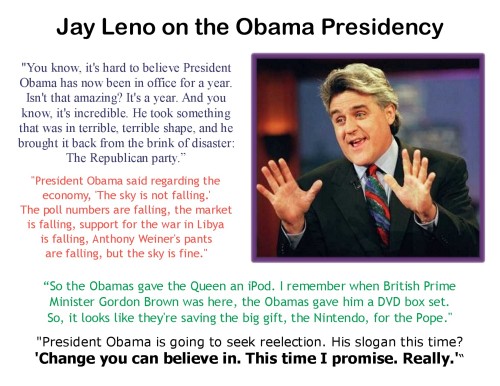 How serious is the S&P downgrade? Let me think. How about “Pearl Harbor serious”? 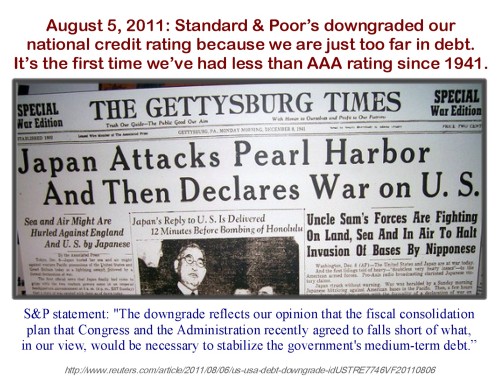 Our country really is in serious trouble. If you think I am exaggerating, you haven’t been paying attention. 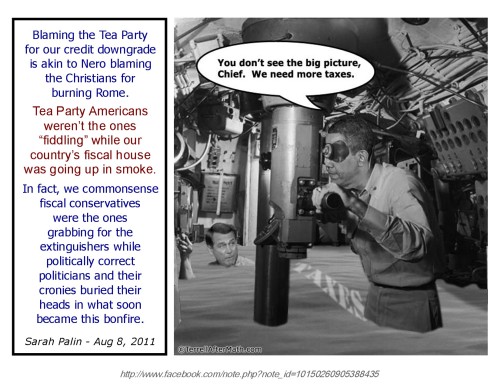 Americans who seriously care need to look beyond tired old Democrat slogans and learn how the economy actually works. Otherwise, we’re headed into another Great Depression.

Below: Cato Institute report on the real impact of Reaganomics.  Cato is a Libertarian organization; they are NOT apologists for either party.

Cato Institute Policy Analysis No. 261: Supply-Side Tax Cuts and the Truth about the Reagan Economic Record

On 8 of the 10 key economic variables examined, the American economy performed better during the Reagan years than during the pre- and post-Reagan years.

This study also exposes 12 fables of Reaganomics, such as that the rich got richer and the poor got poorer, the Reagan tax cuts caused the deficit to explode, and Bill Clinton’s economic record has been better than Reagan’s.

Comments Off on Pearl Harbor serious

I woke up at 1:00 AM and rushed to my computer to check the results of yesterday’s recall elections.It was gratifying to see that republicans held four of six senate seats,given the unions pumped over thirty million dollars into the races while the establishment GOP did next to nothing.It was left to tea partiers and ordinary people to defeat the massed socialist thugs.There are two democrat flee-baggers up for a recall next week.I don’t know any of the particulars,but I think they might be getting nervous.The reported turnout was higher than expected,considering it was a special election.This tells me that normally complacent citizens are getting engaged in the process.This is a good thing. 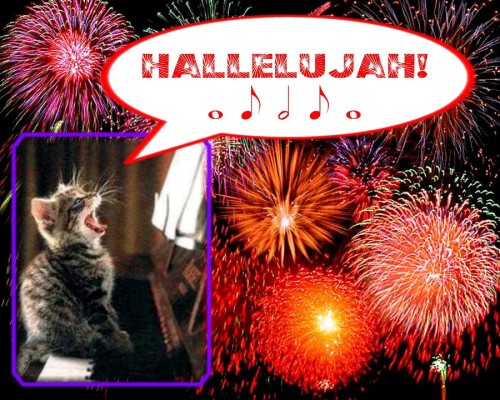 Despite the BS CNN polls they throw in our faces claiming both sides are to blame for the country’s woes,people are seeing the Kenyan for what we all knew he was all along.They would never say it publically,but a lot of dems are hearing an ominous rumble that’s only going to get louder with the passing months.There are better days coming.I can feel it.

THE LEFT WAKES UP;OBAMA NOT ‘SORT OF GOD’

BARNEY TOOTS HIS OWN HORN

The market soared after the fed announced this.They claimed they would not raise interest rates until at least mid-2013.What I took that to mean was a signal the feds would keep printing money to prop up the market and buy toxic assets until after next year’s election.

TO RULE MEANS TO REIGN

THE LEFT WAS ALL IN IN WISCONSIN–AND LOST

Didn’t matter much who he picked.They’re all losers with orders to screw things up.

I bet y’all read this

VIDEO:VERIZON UNION THUG TRIES TO INTIMIDATE REPLACEMENT WORKER BY PLACING HIS OWN DAUGHTER IN FRONT OF MOVING CAR

Need any more proof of how far gone the left is?Watch this:

Mom defends her husband murdering their daughter because she became too westernized.

Tell me again how Islam is the religion of peace–I keep forgetting.