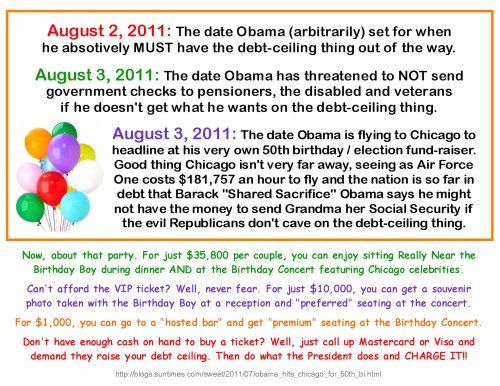 Death sentence for being Christian

Comments Off on Death sentence for being Christian

Obama the Whiney and Arrogant

A pithy analysis of the president’s response to Question 2 at the July 11, 2011 presidential press conference

At his July 11, 2011 presser, President Obama called on Chip Reid of CBS News to ask the second question. Chip threw him a nice soft ball:

Q:  “You said that everybody in the room is willing to do what they have to do, wants to get something done by August 2nd.  But isn’t the problem the people who aren’t in the room, and in particular Republican presidential candidates and Republican Tea Partiers on the Hill, and the American public?”

Then Chip cited an interesting statistic:

Q. “The latest CBS News poll showed that only 24 percent of Americans said you should raise the debt limit to avoid an economic catastrophe. There are still 69 percent who oppose raising the debt limit.”

That leaves 7% who answered “Don’t know” or “No opinion.”

Q. “So isn’t the problem that you and others have failed to convince the American people that we have a crisis here, and how are you going to change that?”

Is he SERIOUS?!  69% oppose what Obama wants to do, so the “problem” is that the Messiah has failed to communicate?!

Let me think how that would’ve gone with a Republican president. … hmmm …

“Mr. President, 7 out of 10 Americans think you’re wrong. Why do you persist in holding on to this unpopular position of yours?”

Now that we’ve watched CBS plump His O’liness’ pillow, let’s look at what Mr. Obtuse and Verbose had to say.

Or rather, let’s NOT look at the whole thing, because (ahem) he went ON and ON for about 7 minutes … speaking 938 words which, if typed double space would fill more than 3 pages.

Instead, we’ll do Chrissy’s Cliff Notes of Obama’s Answer.

Uh … well, sir, I’ll grant you the 7% who neither agreed nor disagreed with you are clearly not paying attention. But 7% is not the public at large.  It’s just 7%.

The public at LARGE would be the 69% who disagree with you, some of whom, by the by, voted for you.  Do the math.

Basically, what I’m hearing you say, sir, is … and correct me if I’m wrong. You believe that the 7 out of 10 Americans  who disagree with you Do Not Matter because they are clearly way too stupid to understand stuff like “the ins and outs of how a Treasury option goes.” Is that about right?

I’m sorry, Mr. President, but this one won’t fly. CBS News did that poll. They’ve got a well-deserved reputation for skewing polls in your FAVOR. I mean … look at the question their reporter gave you?! Sheesh.

If the BEST they could swing for your side was 24 percent in favor and a bogus “the problem is your messaging” spin, that is truly pathetic.

Oh. My. Goodness. Is he for real?  “I work my fingers to the bone.” “These people don’t appreciate me.”  Blah blah blah. Pay a shrink.  Or tell your bartender.

But please, Please, PLEASE … Don’t pretend to be leader of the free world and get up in front of millions and WHINE about how hard the job is. It’s demeaning.

At this point, Reid added an addendum to his question:

“Do you think he’ll come back to the $4 trillion deal?”  [He being Speaker Boehner of the lying-liar-who-is-keeping-me-from-doing-fun-NFL-stuff fame.]

This would be the same man you just said was being irresponsible and KNEW IT?

Oh. My. Goodness. Did HE actually say that with a STRAIGHT FACE?!

Strike up the violins, cuz Obama the Caring and Stoic is apparently the ONLY one on either side of the aisle who Understands The Big Picture Here and is willing to take time away from his busy sports schedule to Do Hard Things like gives sales talks to the Lazy People in his party and the Lying People in the other party and the “at large” Stupid People (aka, voters) into doing what He, Oz-bama the Wise and Wonderful, commands.

FULL TRANSCRIPT of presser is posted at

Comments Off on Obama the Whiney and Arrogant

No more “No Drama” Obama

I once sat through a four hour property closing. If you’ve ever closed on a property, you’ll appreciate how extraordinary it was that even this fairly complicated closing took more than an hour. The seller held a land contract with the previous owner; we were there representing a corporation that wanted to buy it outright, so there were a lot of papers to sign. But really, that’s all that was left. Signing papers.

Unfortunately for all of us, the seller was … how shall I put this? Moonbat cuckoo pants? All the things we’d negotiated had to be done over from scratch. Then he brought up new things to be mad about.

Two hours in, the first owner and I left to go to the powder room to splash cold water on our hot, angry faces before one or both of us went for someone’s throat. My husband had to leave to go get some paper the seller refused to take the lawyer’s word existed, during which time he got to vent and cool off as well.

But the lawyers never left. The seller’s lawyer did get a tad testy with his obnoxious client, but our lawyer stayed calm, despite having had to cancel 3 hours of appointments. But afterwards, as we walked back to his office, he cussed up a storm the entire way!  I was astonished. I had not seen a single sign at that horrible meeting that he was more than mildly annoyed at the other lawyer for being somewhat unprepared for the meeting. Yet all the time, he was STEAMING and ready to spit nails.

I’m guessing Obama skipped the ‘How to behave like a professional at meetings’ class in lawyer school. Or something.