I finished up all my To Do list by supper time, but Dearest had meetings all evening, so I suddenly found myself with energy and alone time. Woohoo!  I got to go play with those unemployment graphs some more.

H/t to Red Pill for the idea about how who dominates 2 or 3 parts of Congress/Oval correlating with unemployment. It worked up into a very cool graphic!

They met their goals, now we get to judge 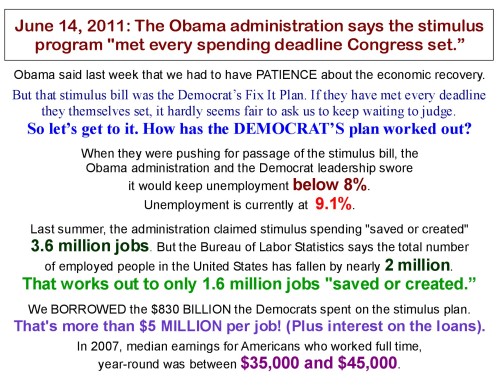 Let us not forget that a whole bunch of the jobs they counted as created were temporary, like for the census. And a whole bunch more of the allegedly saved were actually government union jobs that were never at risk. States just took the stimulus money and used it to pay government salaries, so state politicians in office could shove off on to future politicians the messy business of dealing with the shortfalls in their budgets.

When the stimulus bill passed, Democrats controlled the House, the Senate and the Oval Office. Their plan has not merely failed; it has put our grandchildren into debt for billions that went almost entirely to paying off the people who helped get those Democrats elected. If our so-called leaders were working stiffs, they would be indicted, convicted and sent to prison for what they did. Instead, they are going to retire with cushy life-time pensions they voted to give themselves that include much better health plans than any of us will ever have.

If you are not angry, it is only because you have not been paying attention.

Comments Off on They met their goals, now we get to judge

OBAMA ON WASHERWOMAN:’YOU WANT HER IN YOUR FOXHOLE BECAUSE SHE’S ‘CHARMING’ AND HAS ‘CUTE SMILE’

DOES THIS WOMAN USE ORGANIC HAIR MAYONNAISE??

SEVEN GOP HOPEFULS ARE NO DWARVES

HOW’S THAT HOPE AND CHANGE WORKING OUT FOR OBAMA’S SUPPORTERS?

BEATABLE AND HE KNOWS IT

THE HIGH COST TO TAXPAYERS OF MISSING DADS

This is Obama’s America