Will Obama sink the DNC?

The media are playing “divide and conquer” games against Republicans now, a strategy that worked in 2008 by leaving us with John McCain as the only candidate.  This time they are swinging between viciously attacking Sarah Palin and her family, and hyping real or imaginary divisions between Republicans — never among the Democrats, who present the image of a united front with Stalinesque unity.  But you can bet there’s a lot of vicious in-fighting among Obama, the Clintons, and all the rest, because Obama may be destroying the Democratic Party as we know it.

This article is interesting and got me tinkering with some numbers. 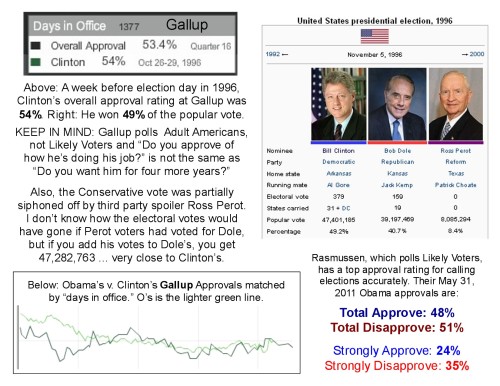 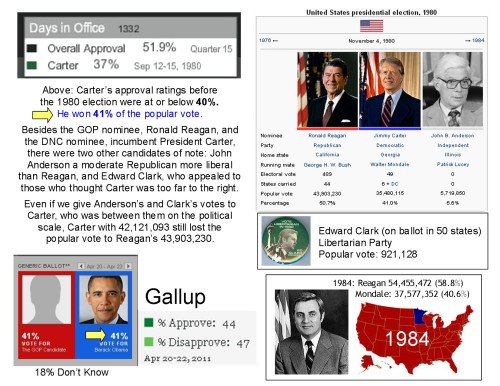 I get the same thing from both of these piles of data that I got from my previous analyses of abortion opinion polls and the behaviors of Obama’s key demos (blacks, women, youth). The best candidate we have to BEAT Obama is Sarah Palin. She’s Ronnie in a skirt.

I’d love to see her nominated by the GOP with Herman Cain as her VP.

A witty, powerhouse of a Pro-Life, Strong Military, I LOVE AMERICA!  “First Woman President” running with a Conservative Black who made a huge success of a failing business (Godfather’s Pizza) through SKILL, not affirmative action.

Never mind the hunk-alicious Todd as First First Dude drawing the “sweaty females (and gay guys) who vote for hot guys” vote and the “manly men with guns who vote for rough, tough guys with guns” vote.

Or the too cute for words Trig who would bring in the disabled vote.

Or Bristol who would bring in the single mothers’ vote.

Plus the Tea Party which, Leftist Media aside, is a powerhouse force in American politics!

What we absotively must NOT do is nominate another moderate white dude … especially whichever one the media tells us is “the one to beat Obama.” Because duh … they gave us the nice guy moderate McCain who only did as well as he did because he brought Sarah Palin on board.

Oh and one more thing. Don’t forget that of all the potentials out there … Palin is the only one who has been vetted top to bottom and front to back. There are NO OCTOBER SURPRISES the Left can pull on her.

Obama, however … snerk. There’s a ton of dirt waiting to be unloaded on HIS sorry head.

P.S., Those of you on my bloggy list got this in email a couple weeks ago. I’ve had it in my “redo for PN” list since then … kinda forgot about it with the family visit and all. I’m still recuperating … SO TIRED!!!  My brain isn’t really functioning, so I figured it was a good day to use up something that was almost all written already.

One response to “Will Obama sink the DNC?”