The Boy Who Cried Hack

According to an article at HuffPo, the thing that may wreck Anthony Weiner’s marriage, ruin his career and destroy his reputation was “a typo.”

Again, according to HuffPo, it was “a rookie mistake” that turned a private message into a public tweet.

Really? His life hasn’t become a punch line because …

… he was sending a lewd photo of his bulging briefs to someone not his wife?

… he was wasting the tax-payers’ time (while cheating on his wife)?

… he lied about it for a full week?

Nope. It’s just he hit the wrong key. Poor boy! It could happen to anyone.

Oh, and guess what? Such mistakes happen “millions of times a day,” says an expert. It isn’t even necessary to hit the wrong key. Security flaws in the services themselves expose private messages.

He also used yFrog for the creep-tastic photos of himself that he was sexting to co-eds around the country. Apparently, anyone who ventured to this site (before Weiner deleted them) could have simply clicked through and seen all the photos he uploaded, regardless of whether or not they were publicly tweeted.

And it seems Weiner is no novice. He tweeted many times a day, frequently engaged his followers in one-on-one conversations, and … just to put the cherry on top … helped shape internet legislation.

Plus, on the heels of some of the most serious computer security breaches in history, he blamed hackers for his own mistake.

His blame game is concerning to some security experts, who fear accusations of this kind could take attention away from the seriousness of the threat from cyber attackers. (Anyone else reminded of Tawana Brawley?)

And if he was Rep. Anthony Weiner (R-NY)?  The Left would no doubt be screaming for tar and feathers. 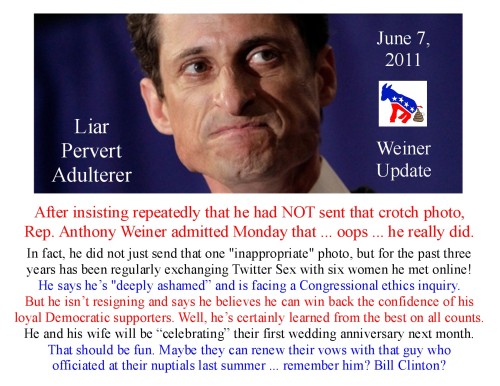 9 responses to “The Boy Who Cried Hack”