Lil Buzz and the Buzzy Bag

What a joy to watch him engrossed in something I made for him!! It’s going to last him a long time, too. The only skill he’s ready for is pulling the biggest snaps apart and he’s only at the “half skill” stage for that one.

Half skills are like when a baby can roll from tummy to back, but not back to tummy or pull herself up but not sit back down again. They demand an adult stand at the ready like an operating room nurse to “reset” the situation so the tot can practice the newly developed half skill again and again.

Lil Buzz worked hard at figuring out just where to hold his fingers to pull those intriguing snaps apart, then he’d hand it to me to resnap them so he could try again. He pulled the lace out (middle photo) by accident when he was messing with the snaps and after that he moved on to riffling the pages of his Mommy’s book. He’s been ignoring his own books lately in favor of grabbing adult paperback books to riffle. LOL

We’re having a kind of lazy day. Yesterday was a long one, with all the girls here for a Very Special Big Day. When I am a little more rested and a lot less whelmed about what they did for me, I’ll tell you about it. I’ve been trying to think if anyone at any time in my 5½ decades ever did anything so totally thoughtful and special. So far I can’t recall a single thing.

Here’s to the rise of skepticism in the Lame Stream Media’s vacuous support of Obama. 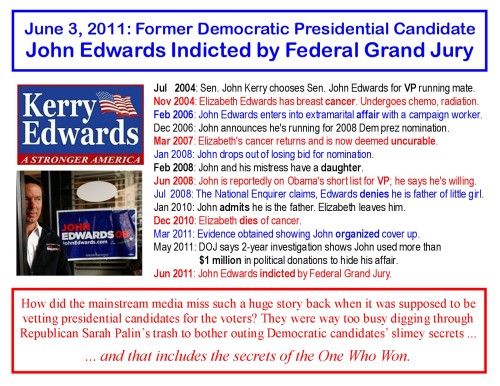 Comments Off on Edwards indicted 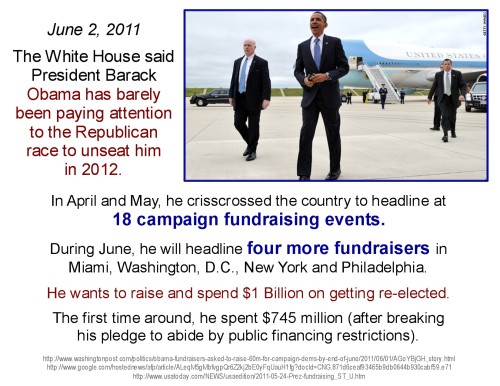 Every day begins with the Presidential Daily Briefing. After that …

May 16: Fly to TN about flooding. Give speech. Fly home. Shmooze with the 2011 NCAA champs. Talk at two fund raisers.

May 17: Meet with King of Jordan. Lunch with Joe. Shmooze with Jews. Meet with Secy of Defense.

May 18: Fly to CT. Speech to Coast Guard graduates. Fly to Boston for two fund raisers.

May 19: Meet with advisors. Give speech that pisses off Israel. Interview with BBC. Meet with Sec of Treasury. Go to two fund raisers.

May 20: Meet with Prime Minister of Israel. Talk to press. Speech to CIA employees.

May 31: Announce nominee for new Secy of Commerce. Meet with advisors.

Remember back … pre-2008 … when Obama said he’d opt for public financing if his opponent did, but then when McCain did (and limited himself to the amount allowed by law), Obama suddenly decided that public financing was somehow a corrupt way of doing things and he’d go with the “clean” money that was over-flowing his campaign war chest.

Here is his latest, updated version on how to take the moral high road in campaign financing: have your mega-millionaire donors call some of their mega-millionaire donations “matching funds” for the widow’s pence donations of all the good-hearted and earnest American Voters who are no doubt unemployed and taking their precious little pence out of their welfare checks.

I’m just shivering all over with admiration for all the sensitivity and honesty and moral integrity Barack is putting into raising the billion dollars he plans to blow on his campaign. Not.

A Grassroots Action Alert email sent me an update on the ObamaCare court case. Back when the Dems were pushing O-Care through Congress, they SWORE the individual mandate “penalties” were not new taxes.

Then they turned around and told the court that, oh wait, they ARE taxes, which makes them none of the court’s business because Congress has a constitutional right to levy taxes.

The latest update is … the DOJ has conceded that the mandates are PENALTIES after all and therefore the Fourth Circuit can and should rule on this case.

The court may rule before the end of the month, but whatever the ruling, the case is expected to be appealed to the U.S. Supreme Court.

Some of TV’s top executives from the past four decades may have gotten more than they bargained for when they agreed to be interviewed for a politically charged book that was released Tuesday, because video of their controversial remarks will soon be hitting the Internet.

The book makes the case that TV industry executives, writers and producers use their clout to advance a liberal political agenda. The author bases his thesis on, among other things, 39 taped interviews that he’ll roll out piecemeal during the next three weeks.

ITS OFFICIAL:THE LEFT IS OUT OF IDEAS

A DISASTER AT COMMERCE

John Bryson is a dirt-worshipping,tree hugging enviro-wacko of the first order

This country used to export agriculture;since the black farmers who failed forced successful white farmers off their land the country is now starving.I was raised on a farm.If you don’t know what you’re doing,you’ll never make it.

RUSH COMMENTED ON AN ARTICLE RIPPING ON KRAUTHAMMER;IF YOU MISSED IT,HERE IT IS

VIDEO:LARRY,MOE AND CURLY ARE WORKING AS POLICE OFFICERS IN INDEPENDENCE,MO.

CHECK THIS OUT-ITS MY FAVORITE OF THE DAY

Comments Off on I’m speechless