Do our homework? You betcha!

Everyone who has been paying attention should know by now that the mainstream media did a terrible job preparing voters for the 2008 election. Surveys showed Obama voters scored far below McCain voters on knowledge of where the two candidates stood on the important issues. They also showed that on all issues, Fox News viewers scored higher than viewers of any and ever other news source.

I think the single most pathetic statistic was that Obama voters scored very high on “Which party spent $150,000 on clothes for one of its candidates?” then overwhelmingly answered “Sarah Palin” for “Who said, ‘I can see Russia from my house’?” Clothes and a Saturday Night Live skit by Tina Fey. That’s what our Fourth Estate passed on to the voting public as the two most important things they needed to “know” about the McCain-Palin ticket before exercising their sublime right to participate in choosing the next leader of the Free World.

Wise words from a wise woman.

Dearest is off to the grands again where Lil Buzz has returned after his tour of New England. He found Grandfather’s dominoes. The Dearest Clan is gathering to graduate a Valedictorian Nephew’s high school graduation! Woohoo!

Corporal K baked a strawberry-rhubarb pie :o). I really love the camera-phone-emails-to-Mom thing! It makes me feel like the girls are just next door.

Me and the poo-doodles are Home Alone until the Hyphenated Horde begins arriving on Monday. My Memorial Day weekend will focus on resting up for all the excitement to come.

I just wish the dominoes pic were not out of focus. It’s such a charming pose and the light coming in from the side is so sweet.

Because of the long winter, everything is behind schedule in Wisconsin. And because of the terrible economy, I haven’t had any money to spend on flowers. So what we have in the garden is whatever survived from last year. Fortunately, the forget-me-nots I planted a few years ago not only come back every spring, they multiply and become more vibrant and more beautiful every year.

Filed under How Does Your Garden Grow?

WI. REPUBLICANS WILL HAVE TO BE COURAGEOUS ONE MORE TIME

GOP AND DEMS BOTH FEAR PALIN

WHAT DO YOU WANT FOR YOUR HEADSTONE?

The Mexican ones are hilarious!!

The D in Democrat stands for Do-nothing 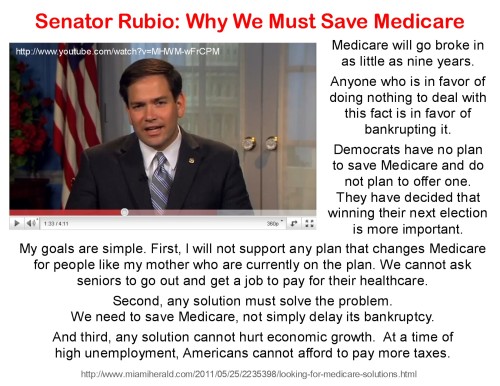 I am reminded of the months and months of ObamaCare debating when the Left blatted that Republicans did not have a plan of their own. The Left Stream Media backed them up on their big fat lie. Republicans put forward a bunch of plans. The Democrat majority leaders refused to let any of them on to the floor.

I’m thinking if one of the Republican health care plans had ever seen the light of day, some Republicans would have voted for it. Since Democrats have the majority in the Senate, they could have passed the Obama budget plan. Instead they ALL voted NAY. So pathetic.

Awkward Moment During Obama Toast to Queen – May 24, 2011
http://blogs.abcnews.com/politicalpunch/2011/05/awkward-moment-during-obama-toast-to-queen-.html

The president and the orchestra at Buckingham Palace this evening were a bit out of synch.

When the president toasted the Queen the orchestra misunderstood a pause and what seemed to be a cue from the president for “God Save the Queen” to begin playing.

“Ladies and gentlemen please stand with me and raise your glasses as I propose a toast,” the president said, putting down his note cards and grabbing his glass. “To her majesty the Queen.”

The president paused, the guests stood, and the orchestra prepared to play.

But the president wasn’t done speaking.

“The vitality –“ the president said before the orchestra began.

Then the familiar tune – you might know it better as “My Country ‘Tis of Thee” – started up.

The president kept going: “ — of the special relationship between our peoples and for the words of Shakespeare to this blessed plot, this earth, this realm, this England,” the president said as the awkward moment played out.

The Queen looked ahead as the UK anthem played.

“To the Queen,” the president finally said.

He lifted his glass to her, she smiled a bit uncomfortably.

But because the song was playing, no one drank from his or her glass, including the president, who put his glass down on the table.

Then once the song was over, everyone raised a glass.

It almost felt like one of those moments at the Academy Awards when the speech from the recipient for Best Original Screenplay goes on too long and the orchestra tries to hustle him or her off the stage.

I got this in email:

Sarah Palin, Leader of the Pack!

So, who do I like as our Republican presidential candidate in 2012?  Parodying the song recorded by The Shangri-Las: “The liberal media is always putting her down (down,down). They said, she came from the wrong said of town. They told us she was bad. Then I knew she was the best we had. That’s when I fell for the leader of the pack.” Who am I singing about? Obviously, the one and only Sarah Palin.

Folks, it is a bit too early to go all in on any presidential candidate.  I really like Herman Cain.  But when I think of the one person who appears to be uncontrolled by liberal media attacks; who epitomizes the kind of “in your face” no holds barred approach to attacking Obama’s horrific record, we Tea Party patriots are so desperately longing for, hands down, it is Sarah Palin.

I know. I know. Republican elites and conventional wisdom says, “Be reasonable. Palin is too toxic. She could never win. Pick an electable candidate like Mike Huckabee or Mitt Romney.”

When ObamaCare first became law, Huckabee said repealing it would be difficult. He suggested that we try to find some good in it. My mental buzzer went off, “Wrong answer”.

On Rush Limbaugh’s radio program, Donald Trump cautioned Paul Ryan to work with the Democrats and not be too aggressive about moving forward with his budget proposal. Again, Trump set off my buzzer, “Wrong answer.”

“Working with Democrats” always means compromising our values, principles and desires. We want conservative representatives with backbone in Washington fighting on our behalf.  Yes, the liberal media will portray them as Satan incarnate.  But, there’s a new sheriff in town called the Tea Party and we have our representatives’ backs.

As for Romney, I do not sense a fire in the belly of this man about standing up for conservatism or the Tea Party.

The liberal media is planning a sequel to the McCain/Obama race in which they picked our “moderate” losing candidate.

Once again, the liberal media is telling us who is “too Tea Party” to win and why we should pick a moderate to run against Obama in 2012.  The title of the liberal media’s sequel is, “Sucker the Conservatives Two: This Time We Really Think You’re Stupid”.

Let me tell you what I think about moderates.  Even Jesus had a problem with moderates.  He said, “You are lukewarm — neither hot nor cold, I will spew you out of my mouth.” In other words, for crying out loud, have the backbone, character and conviction to take a stand for something.  The liberal media wants to set us up with another moderate linguine spine to lose again!

The 2012 presidential election is going to be all about Obama.  Thus, we need a candidate who understands this reality and will boldly go after Obama politically; someone with all American John Wayne true grit committed to Tea Party principles.  So far, our John Wayne is a Momma Grizzly.

As I said, it is a bit too early to formally endorse anyone.  Palin may or may not throw her hat into the ring.

Now, regarding the issues, Palin is pretty much on the same page as most of us tea party patriots; drill baby drill, smaller government and no new taxes.

And once again, I must cite her boldness and confidence when espousing her conservative beliefs.  You never see Palin dancing around questions from liberal media hacks trying to make her conservative ideas sound mean, heartless, stupid and racist.  It is extremely refreshing and encouraging to see someone on our side fearlessly challenging the liberal media!

And what about presidential charisma? In my nationwide travels on four Tea Party Express tours, in which Palin participated, nobody sparked excitement nor struck a stronger emotional chord with audiences at the rallies than Sarah Palin.  She is a rock star.  The people love her.

I pray that whomever we select as our presidential candidate will grasp the seriousness of the situation in which we find our country. Various potential Republican presidential candidates are good people with great conservative ideas to get our country back on track.  The most important critereon for a candidate to win my support is a willingness to launch a shock and awe all out assault on Obama’s horrific record and terrifying agenda.

Obama has the bully pulpit of the Oval Office, his Democrat minions, racist black so-called civil rights groups and a sycophant liberal mainstream media, all working in concert for him to be reelected in 2012. America cannot survive another Republican presidential candidate committed to “playing nice” for fear of being called racist. As they say in AA, “Half measures avail us nothing”.

If Obama is reelected in 2012, America as we know it is over. King Obama must be politically dethroned.

Comments Off on What he says

It is close to an article of faith on the left that any hydrocarbon-based source of energy must cause severe pollution problems. But that don’t make it so.

“I have great respect for Lisa Jackson and I always appreciate her honesty,” he said in a statement. “Although we disagree on most issues, when you ask her a question she gives you an honest answer. Over the past two years, I have asked various Obama Administration officials if they know of a single confirmed case of groundwater contamination from these fracked formations and every time the answer is no. Lisa Jackson’s statement today that she does not know of any proven case of water contamination further demonstrates that States are regulating hydraulic fracturing effectively and efficiently, and there is no need for the federal government to step in.”

When Queen Elizabeth came here to celebrate the 400th anniversary of the British settlement in Jamestown, Virginia, George Bush welcomed her to the White House by noting she had last visited when she came to help us “celebrate America’s bicentennial in 177…1976.”

The gaffe drew laughs from the 7,000 spectators and Bush remarked Queen Elizabeth “gave me a look that only a mother could give a child.”

Later, at a black-tie gathering, the queen opened her dinner toast to the president with a playful grin. “Mr President, I wondered whether I should start this toast saying I was here in 1776 but I don’t think I will.”

The guests and Bush erupted with laughter and the queen smiled broadly before continuing with her text.

At the beginning of his toast, Bush said, “Your Majesty, I can’t top that one!” 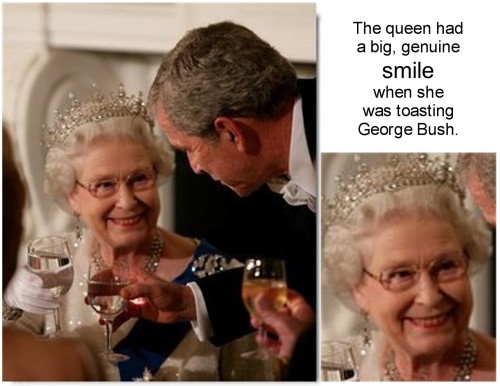 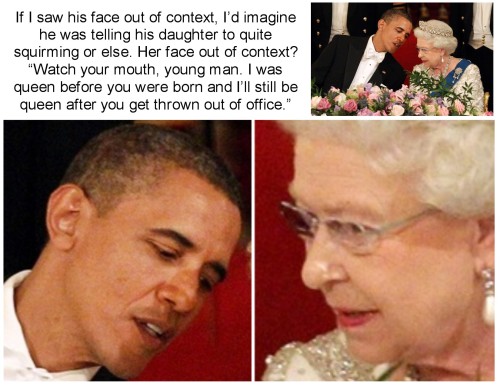 RACISM TO BLAME FOR OBAMA’S PROBLEMS

MEDISCARE WAS REAL WINNER IN NY 26

Even with the media carrying him,he knows he can’t win on his own

BARNEY FRANK KNOCKED ON HIS FANNIE

RUSH’S ANALYSIS IS SPOT ON

SURVIVAL OF THE WELL-CONNECTED

SO MUCH FOR THOSE ‘UNBREAKABLE BONDS’

SCHULTZ GETS ONE WEEK SUSPENSION FOR REMARKS

I wish I was making this up