Voter ID is a no brainer 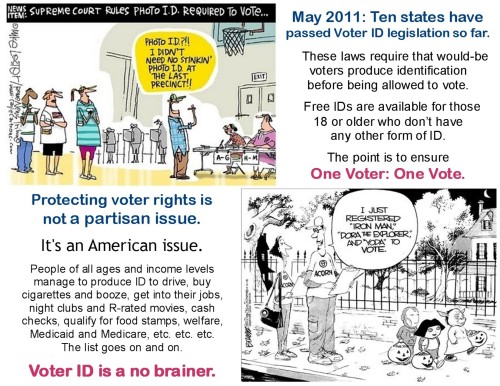 Donna Brazille claims, “11% of Americans — 21 million citizens of voting age who lack proper photo identification — could be turned away on Election Day. And these people tend to be most highly concentrated among people of color, the poor, the young and the old.”

I’d like to know (a) where does she get this ridiculous number? And (b) How is it that she is so sure the people who are TOO DUMB to get an ID card (if they don’t have one already) are all minorities, poor, young and old? Isn’t that kinda racist of her to stereotype people like that? I thought Lefties didn’t DO that. (Just kidding. Of course they do.)

Besides which … excuse me for having an opinion like this, as I’m sure it is racist, homophobic, blahdiblah … but do we really want anyone that dumb voting? I mean, really … how much could they be expected to know about the candidates and issues if they don’t know how to obtain and carry a card with their name and photo on it?

28 billion more reasons to kick these turkeys out of office! 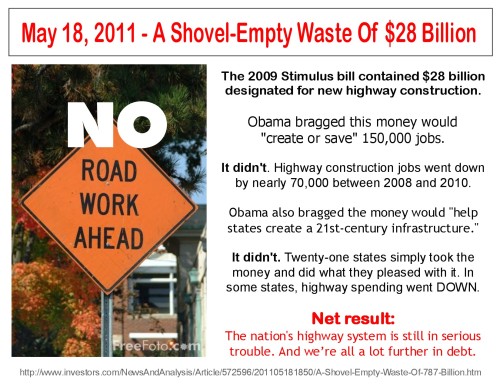 Comments Off on 28 billion more reasons to kick these turkeys out of office! 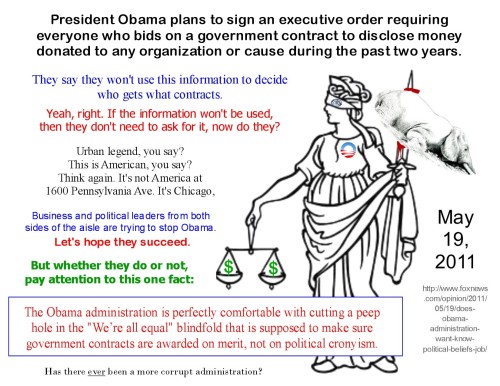 A coalition of more than 80 business groups told President Obama to “abandon” a draft executive order that would have government contractors disclose their political contributions. …

The letter comes as the draft order has fallen under heavy criticism from several Republicans, as well as a few Democrats. …

Democrats and the White House tried and FAILED to pass the Disclose Act last Congress, despite Democrats having a super-majority in the House and Senate.

In other words, opposition to this kind of political thuggery is bipartisan.

The Disclose Act was the Democrats’ response to the Supreme Court’s Citizens United decision in January 2010 that allowed corporations to spend unlimited funds on political activities.

Since corporations tend to support Conservative Republicans, Democrats hated this decision. Obama was so miffed, he scolded the Justices on national television during his State of the Union. One of his classier moves (not).

As I understand it, Democrats’ big supporters … big unions like the NEA and SEIU and professional Leftist groups like ACORN and Planned Parenthood … were already allowed to donate the big bucks, most of which they got by ripping off taxpayers and nearly all of which they dumped into Democrat coffers to keep their taxpayer-funded gravy trains chugging along.

But it’s not about politics. It’s about Transparency in Government! (Riight.)

Why Does the Obama Administration Want to Know Your Political Beliefs Before They Give You a Job? By Dana Perino – May 19, 2011

A SHOVEL-EMPTY WASTE OF  787 BILLION DOLLARS

I love Ann;she’s snarkier than I am!

WHY OBAMA IS JUST NOT THAT INTO YOU

She’a going apesh*t because some states have passed voter ID laws;imagine,having to prove who you are!

WHY WON’T MEDIA STAND UP TO THE WHITE HOUSE

Because they’re on their knees putting hickeys on his hindquarters?

WHO GOT OBAMACARE WAIVERS AND WHO’S STILL WAITING?OBAMA WON’T TELL US

This picture is so bizarre,I just had to post it

I’m so excited by this! When the first cousin in this branch of the clan was born, I made one of my fancy schmancy play pads. But a family only needs one of those, so for the second cousin, I commissioned this super sturdy log cabin.

The artist was selling a variation I liked, but I had ideas, like changing the top board from pointy to flat. I figure … kids are GOING to climb on the thing. Might as well make it just that little bit safer, maybe spare the folks a trip or two to the ER for head CTs.

I also had him put a sealant on the bottom. The stain he used is safe for kids, but doesn’t seal in the wood’s natural acidity. It’s a heavy piece and was likely to sit on a carpeted floor, in one spot, for years at a time. The acid would ruin the carpet.

The artist told me when we were done that he liked my ideas so much, he was incorporating them into his regular line. :o)

Over the next couple of years’ holidays, we splurged on this line of sturdy wooden doll house furniture, appliances and a car or two.

I am SO TICKLED to see our Lil Buzz enjoying it all! 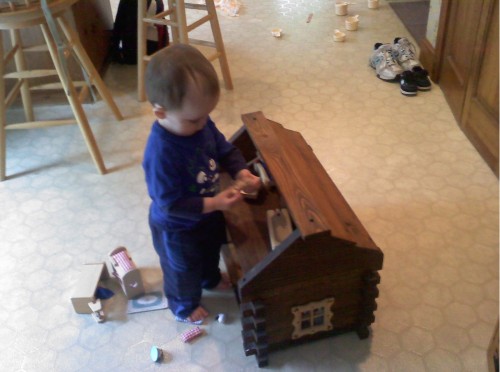