I caught a link at one of the places Pete posted and found a whole slew of never-before-seen 9-11 images. Here’s one: 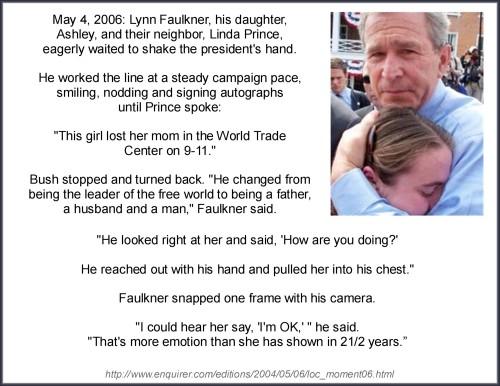 Not so GORGEOUS as Ting’s garden!! … but I just finished this and I’m SO proud of it that I just have to toot my little horn!

Mama Buzz wanted to get Lil Buzz (he’s gotten too big to call Baby any more!) one of those “fastener” dollies so he could practice buttoning and snapping and zipping etc. They were kinda pricey and she has this über crafty mama, so she naturally passed the challenge on to moi.

I love nothing better than a project for which there’s no pattern! LOL Seriously. It’s so fun to figure it all out! I started with a photo of a Humpty Dumpty doll I saw on-line and my stash of quilting fabrics, ribbons, yarns, multi-colored threads, fiber fill and fasteners.

Dearest hit the stores for snaps, eyelets and laces.  Mama Buzz wanted Velcro also, but the stuff gives me a rash, so Lil Buzz can learn that on his sneakers.

I also found a buckle and two buttons in Grandmother’s Sewing Box that were perfect. Marci was Dearest’s grandmother, which makes those buttons and buckle FIFTH generation to Lil Buzz!

As I worked along, I kept getting Big Ideas until the simple egg shaped doll with a few fasteners turned into a two-faced, zip up tote! It even has a fat little stuffed bottom so it doubles as a nap-time pillow for the car. :o)) 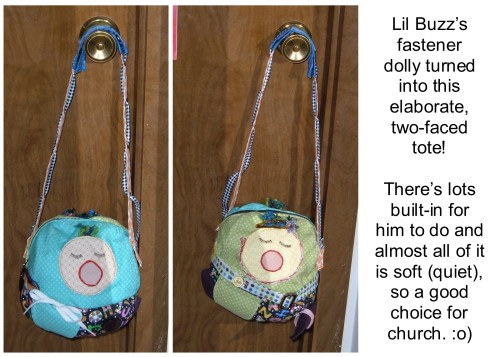 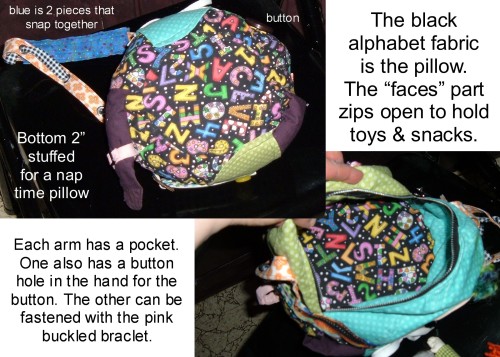